The Swerve: How the World Became Modern (Paperback) 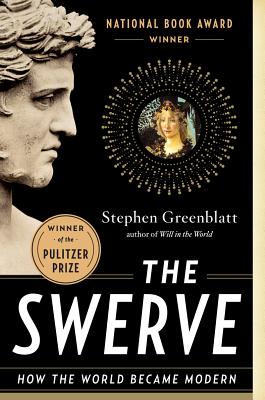 Following one 15th Century humanist and book-hunter through his discovery of what was presumed to be a lost ancient text that reintroduced working theories on atoms which science would later discover and embrace as fact, Greenblatt shows us how this discovery is a huge turning point in world history. By guiding us through Poggio Bracciolini's life and journey we learn about the culture and times in which he lived in and fought to preserve history. — Alex Bell

Renowned scholar Stephen Greenblatt brings the past to vivid life in what is at once a supreme work of scholarship, a literary page-turner, and a thrilling testament to the power of the written word.

In the winter of 1417, a short, genial, cannily alert man in his late thirties plucked a very old manuscript off a dusty shelf in a remote monastery, saw with excitement what he had discovered, and ordered that it be copied. He was Poggio Bracciolini, the greatest book hunter of the Renaissance. His discovery, Lucretius’ ancient poem On the Nature of Things, had been almost entirely lost to history for more than a thousand years.

It was a beautiful poem of the most dangerous ideas: that the universe functions without the aid of gods, that religious fear is damaging to human life, that pleasure and virtue are not opposites but intertwined, and that matter is made up of very small material particles in eternal motion, randomly colliding and swerving in new directions. Its return to circulation changed the course of history. The poem’s vision would shape the thought of Galileo and Freud, Darwin and Einstein, and—in the hands of Thomas Jefferson—leave its trace on the Declaration of Independence.

From the gardens of the ancient philosophers to the dark chambers of monastic scriptoria during the Middle Ages to the cynical, competitive court of a corrupt and dangerous pope, Greenblatt brings Poggio’s search and discovery to life in a way that deepens our understanding of the world we live in now.

Stephen Greenblatt (Ph.D. Yale) is Cogan University Professor of the Humanities at Harvard University. Also General Editor of The Norton Anthology of English Literature, he is the author of eleven books, including Tyrant, The Rise and Fall of Adam and Eve: The Story that Created Us, The Swerve: How the World Became Modern (winner of the 2011 National Book Award and the 2012 Pulitzer Prize); Shakespeare's Freedom; Will in the World: How Shakespeare Became Shakespeare; Hamlet in Purgatory; Marvelous Possessions: The Wonder of the New World; Learning to Curse: Essays in Early Modern Culture; and Renaissance Self-Fashioning: From More to Shakespeare. He has edited seven collections of criticism, including Cultural Mobility: A Manifesto, and is a founding coeditor of the journal Representations. His honors include the MLA’s James Russell Lowell Prize, for both Shakespearean Negotiations: The Circulation of Social Energy in Renaissance England and The Swerve, the Sapegno Prize, the Distinguished Humanist Award from the Mellon Foundation, the Wilbur Cross Medal from the Yale University Graduate School, the William Shakespeare Award for Classical Theatre, the Erasmus Institute Prize, two Guggenheim Fellowships, and the Distinguished Teaching Award from the University of California, Berkeley. He was president of the Modern Language Association of America and is a fellow of the American Academy of Arts and Sciences, the American Philosophical Society, and the American Academy of Arts and Letters.

The ideas in The Swerve are tucked, cannily, inside a quest narrative. . . . The details that Mr. Greenblatt supplies throughout The Swerve are tangy and exact. . . . There is abundant evidence here of what is Mr. Greenblatt’s great and rare gift as a writer: an ability, to borrow a phrase from The Swerve, to feel fully 'the concentrated force of the buried past.'

In this gloriously learned page-turner, both biography and intellectual history, Harvard Shakespearean scholar Greenblatt turns his attention to the front end of the Renaissance as the origin of Western culture's foundation: the free questioning of truth.
— starred review - Publishers Weekly

In The Swerve, the literary historian Stephen Greenblatt investigates why [Lucretius'] book nearly dies, how it was saved and what its rescue means to us.

In this outstandingly constructed assessment of the birth of philosophical modernity, renowned Shakespeare scholar Greenblatt deftly transports reader to the dawn of the Renaissance...Readers from across the humanities will find this enthralling account irresistible.
— starred review - Library Journal

Every tale of the preservation of intellectual history should be as rich and satisfying as Stephen Greenblatt's history of the reclamation and acclamation of Lucretius's De rerum natura from obscurity.

It's fascinating to watch Greenblatt trace the dissemination of these ideas through 15th-century Europe and beyond, thanks in good part to Bracciolini's recovery of Lucretius' poem.
— Salon.com

But Swerve is an intense, emotional telling of a true story, one with much at stake for all of us. And the further you read, the more astonishing it becomes. It's a chapter in how we became what we are, how we arrived at the worldview of the present. No one can tell the whole story, but Greenblatt seizes on a crucial pivot, a moment of recovery, of transmission, as amazing as anything in fiction.

[The Swerve] is thrilling, suspenseful tale that left this reader inspired and full of questions about the ongoing project known as human civilization.

Can a poem change the world? Harvard professor and bestselling Shakespeare biographer Greenblatt ably shows in this mesmerizing intellectual history that it can. A richly entertaining read about a radical ancient Roman text that shook Renaissance Europe and inspired shockingly modern ideas (like the atom) that still reverberate today.
— Newsweek

A fascinating, intelligent look at what may well be the most historically resonant book-hunt of all time.
— Booklist

Pleasure may or may not be the true end of life, but for book lovers, few experiences can match the intellectual-aesthetic enjoyment delivered by a well-wrought book. In the world of serious nonfiction, Stephen Greenblatt is a pleasure maker without peer.
— Newsday

The Swerve is one of those brilliant works of non-fiction that's so jam-packed with ideas and stories it literally boggles the mind.