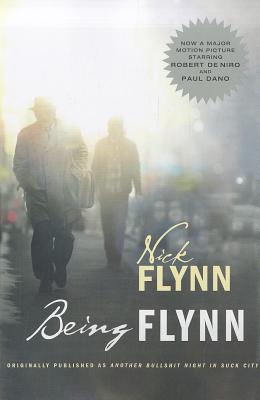 The book formerly known as Another Bull---- Night in Suck City is (for now) Being Flynn, in keeping with the film title starring Robert De Niro, Paul Dano, and Julianne Moore. If the film is half as good as the book, be prepared for something superb. Flynn writes in a unique style about a troubled childhood and an alcoholic, homeless father who re-enters his life after years of estrangement. In the crowded field of literary memoirs, Nick Flynn's story is a stand out. — Stan Hynds

Nick Flynn met his father when he was working as a caseworker in a homeless shelter in Boston. As a teenager he'd received letters from this stranger father, a self-proclaimed poet and con man doing time in federal prison for bank robbery. Being Flynn (previously published as Another Bullshit Night in Suck City) tells the story of the trajectory that led Nick and his father onto the streets, into that shelter, and finally to each other.

Nick Flynn is the author of This Is the Night Our House Will Catch Fire and three previous memoirs, including the PEN/Joyce Osterweil Award–winning Another Bullshit Night in Suck City, and four volumes of poetry. A professor on the creative writing faculty at the University of Houston, he lives in Brooklyn, New York.

A potent, distinctive autobiography…Flynn’s talents are considerable—he has a compelling voice and a wry sense of humor, especially about himself.
— Vendela Vida

Told with energy, critical reflection and sensitivity, Being Flynn [previously published as Another Bullshit Night in Suck City] is less a memoir than a study of one of America’s darker conundrums: homelessness…[It suggests] Lear, Beckett, Faulkner, Genet and forc[es] us to decide which is more painful: a parent’s lost dreams or a child’s lost innocence.


In a perverse act of divine intervention, a life worth writing about was bestowed on a man actually able to write?in startling, beautiful, unsentimental prose…It is crammed with beauty and wisdom, and everyone will love it.
— Devin Friedman