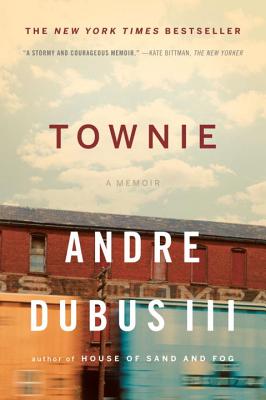 Dubus's memoir focuses on his years growing up in neighborhoods that were as much fighting class as they were working class. He, his three siblings and his mother endured considerable hardships, including many violent encounters, while his famous but mostly absent father lingered on the fringes. This is a fascinating examination of violence and how it can simultaneously attract and repulse. — Stan Hynds

“This is an intensely courageous portrait of growing up after Dubus' renowned writer father leaves his mother, him, and his three siblings to confront the desolate, broken-down world of the mill towns of Massachusetts while he, in turn, teaches in nearby elitist colleges. Dubus bravely bares the veins of violence, fear, survival and love with a tender toughness, a linguistic grace, and an utter absence of rancor that places him among the most effective American memoirists writing today.”
— Margot Liddell, Norwich Bookstore, Norwich, VT

"Dubus relives, absent self-pity or blame, a life shaped by bouts of violence and flurries of tenderness." —Vanity Fair

After their parents divorced in the 1970s, Andre Dubus III and his three siblings grew up with their overworked mother in a depressed Massachusetts mill town saturated with drugs and everyday violence. Nearby, his father, an eminent author, taught on a college campus and took the kids out on Sundays. The clash between town and gown, between the hard drinking, drugging, and fighting of "townies" and the ambitions of students debating books and ideas, couldn’t have been more stark. In this unforgettable memoir, acclaimed novelist Dubus shows us how he escaped the cycle of violence and found empathy in channeling the stories of others—bridging, in the process, the rift between his father and himself.

Andre Dubus III is the author of Gone So Long, Dirty Love, The Garden of Last Days, House of Sand and Fog (a #1 New York Times bestseller, Oprah’s Book Club pick, and finalist for the National Book Award), and Townie, winner of an American Academy of Arts and Letters Award in Literature. His writing has received many honors, including a Guggenheim Fellowship, a National Magazine Award, and two Pushcart Prizes. He lives with his family north of Boston.

Townie is a better, harder book than anything [Dubus III] has yet written; it pays off on every bet that’s been placed on him.

As a memoir, and as a family story, Townie is beautiful and almost perfectly executed. As a meditation on violence, from an author who once embraced it, it is shocking, necessary and indispensable.

This haunting memoir is as explosive as a Muhammad Ali prize fight, as vivid as a Basquiat canvas…This wrenching story can only strengthen the reputation of Andre Dubus III. From father to son, the torch has passed.
— Dan Cryer - San Francisco Chronicle

A stormy and courageous memoir.
— Kate Bittman - The New Yorker

[Dubus III] is such a solid writer, he redeems the genre. He shows that truth can be as honest as fiction.
— Mark Lindquist - Seattle Times

Dubus has an eye for searing detail that is unequaled so far this century…and he employs that here to maximum effect.
— Joy Tipping - Dallas Morning News

The best first-person account of an author’s life I have ever read. The violence that is described is the kind that is with us every day, whether we recognize it or not. The characters are wonderful and compassionately drawn. I sincerely believe Andre Dubus may be the best writer in America. His talent is enormous. No one who reads this book will ever forget it.
— James Lee Burke

Whatever it cost Dubus to bare his soul and write this brutally honest and life-affirming memoir, it is an extraordinary gift to his readers.
— Wally Lamb

I’ve never read a better or more serious meditation on violence, its sources, consequences, and, especially, its terrifying pleasures, than Townie. It’s a brutal and, yes, thrilling memoir that sheds real light on the creative process of two of our best writers, Andre Dubus III and his famous, much revered father. You’ll never read the work of either man in quite the same way afterward. You may not view the world in quite the same way either.