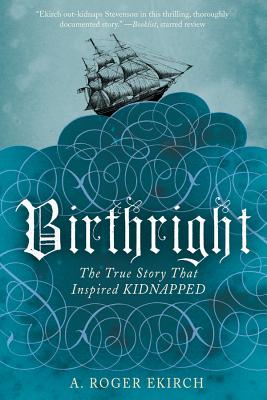 Abandoned by his father, kidnapped by his uncle and sent to Delaware as an indentured servant in 1728, Annesley returned to England and sued for his inheritance. An intriguing and well-written tale that inspired R.L. Stevenson's Kidnapped. — Louise Jones

In 1728, in the wake of his father’s death, the twelve-year-old heir to five aristocratic titles and the scion of Ireland’s mighty house of Annesley was kidnapped by his uncle and shipped to America as an indentured servant. Only after twelve more years did “Jemmy” Annesley at last escape, returning to Ireland to bring his blood rival, the Earl of Anglesea, to justice in one of the most captivating trials of the century. Hundreds of years later, historian A. Roger Ekirch delves into the court transcripts and rarely seen legal depositions that chronicle Jemmy’s attempt to reclaim his birthright, in the process vividly evoking the volatile world of Georgian Ireland—complete with its violence, debauchery, ancient rituals, and tenacious loyalties.

A. Roger Ekirch is a professor of history at Virginia Tech and the award-winning author of At Day’s Close, Birthright, and American Sanctuary. He lives in Roanoke, Virginia.

These historical events, which later formed the basis for Robert Louis Stevenson’s classic novel Kidnapped, end up being more fascinating than the fiction spin-off…[O]ne of the year’s most intriguing history books.

A splendid story of low skullduggery and high politics, and Roger Ekirch deserves congratulation for disinterring it. As befits an eminent historian, his research is detailed and the evidence carefully weighed.
— Andro Linklater - The Spectator

[T]he tale of Annesley’s picaresque adventures is excitingly dramatic…and Professor Ekirch has researched it with academic relish as a real-life oddity that is no stranger than fiction.
— Iain Finlayson - The Times

Ekirch’s book brings the story brilliantly to life and vividly reconstructs the violent and debt-ridden world in which disreputable aristocrats such as Anglesea operated.
— Nick Rennison - Sunday Times

An extraordinary work of history, written by one of America’s most imaginative historians, that is truer and more fascinating than fiction.
— Gordon S. Wood, Pulitzer Prize–winning author of The Radicalism of the American Revolution

Roger Ekirch expertly illumines eighteenth-century societies in the British colonies and the seedy underside of Georgian Dublin.
— Toby Barnard, author of Making the Grand Figure: Lives and Possessions in Ireland, 1641–1770

Ekirch penetrates the cloud of witnesses at the various legal proceedings to create a fascinating picture of Ireland under its Protestant aristocracy…An engrossing familial and legal tale told with dash and clarity.
— Kirkus Reviews