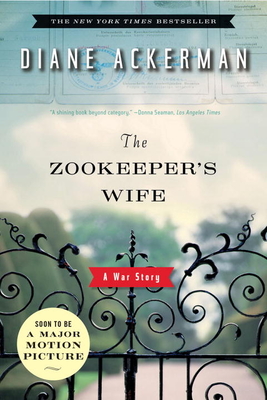 Jan and Antonina Zabinski were caretakers of the majestic Warsaw Zoo when Germany seized Poland in 1939. The story of their expertise and companionship to a vast menagerie of exotic animals makes for a fascinating read all by itself, but these same qualities were highly valued by the Nazis. The Zabinskis used this tenuous advantage and bravely risked everything to rescue several hundred Jews imprisoned at the Warsaw Ghetto. Ackerman's writing shines with great sensitivity and moves with a riveting pace.

A true story in which the keepers of the Warsaw Zoo saved hundreds of people from Nazi hands.

After their zoo was bombed, Polish zookeepers Jan and Antonina Zabinski managed to save over three hundred people from the Nazis by hiding refugees in the empty animal cages. With animal names for these "guests," and human names for the animals, it's no wonder that the zoo's code name became "The House Under a Crazy Star." Best-selling naturalist and acclaimed storyteller Diane Ackerman combines extensive research and an exuberant writing style to re-create this fascinating, true-life story—sharing Antonina's life as "the zookeeper's wife," while examining the disturbing obsessions at the core of Nazism. Winner of the 2008 Orion Award.

Diane Ackerman has been the finalist for the Pulitzer Prize for Nonfiction in addition to many other awards and recognitions for her work, which include the best-selling The Zookeeper's Wife and A Natural History of the Senses. She lives in Ithaca, New York.

It is no stretch to say that this is the book Ackerman was meant to write.
— Los Angeles Times

Diane Ackerman has surpassed even herself in her latest book, which is alternatingly funny, moving, and terrifying. This powerful thriller would be a great novel--except that it is true.
— Jared Diamond