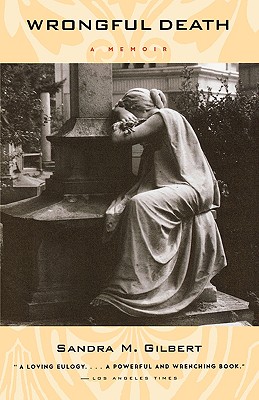 Her husband's death a mystery, poet and scholar Sandra Gilbert looks to the medical establishment first for answers and, finally, for a measure of accountability. A heartfelt, fascinating read.

On February 10, 1991, Elliot Gilbert, a sixty-year-old professor of English, checked into a major medical center for routine prostate surgery. Twenty-four hours later, he was pronounced dead in the recovery room. To this day, no one from the hospital has told his family how or why he died. In Wrongful Death his widow has produced a searingly frank account of one family's experience with a kind of medical disaster that occurs surprisingly often but is all-too-rarely discussed in a political arena dominated by concerns about the escalating costs of malpractice insurance. As her story unfolds, Sandra Gilbert describes the numbing shock into which she and her children were plunged by her husband's inexplicable death as well as the stages of grief they endured as they struggled to come to terms with their loss. But her major focus is on the process of discovery through which, with the help of friends and lawyers, they began to learn something about what had happened to Elliot. What are the implications of such a medical tragedy for the deceased and for his survivors? How does it feel to confront the possibility that a loved one has suffered what the law calls a "wrongful death"? As she examines the bewildering complexity of the legal, social, and medical questions surrounding "adverse events" like the one that killed her husband, Gilbert shows how vulnerable we all are to the power of the health-care establishment.

Sandra M. Gilbert is a distinguished literary critic, professor, and poet. She lives in Berkeley, CA.