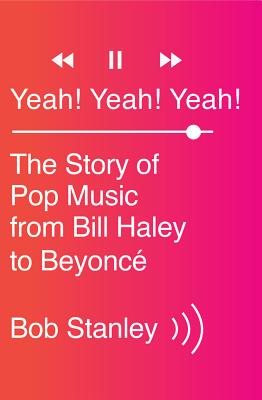 By Bob Stanley
Call or email to see if a used copy is available.
Out of Print

Music history for anyone who ever tuned into the Top 40, spent hours reading liner notes, saved their concert ticket stubs, or learned more from a 7-inch record than they ever did in school. A book that sings like the Spotify playlist in Heaven. Essential! — Charles Bottomley

Music history for anyone who ever tuned into the Top 40, spent hours reading liner notes, saved their concert ticket stubs, or learned more from a 7-inch record than they ever did in school. A book that sings like the Spotify playlist in Heaven. Essential! — Charles Bottomley

An addictively readable, encyclopedic history of pop music in chapters as short and adrenaline-fueled as the best pop songs themselves.

As much fun to argue with as to quote, Yeah! Yeah! Yeah! is a monumental work of musical history, tracing the story of pop music through individual songs, bands, musical scenes, and styles from Bill Haley and the Comets’ “Rock around the Clock” (1954) to Beyoncé’s first megahit, “Crazy in Love” (2003). It covers the birth of rock, soul, R&B, punk, hip hop, indie, house, techno, and more, and it will remind you why you fell in love with pop music in the first place.


Bob Stanley—musician, music critic, and unabashed fan—recounts the progression from the Beach Boys to the Pet Shop Boys to the Beastie Boys; explores what connects doo wop to the sock hop; and reveals how technological changes have affected pop production. Working with a broad definition of “pop”—one that includes country and metal, disco and Dylan, skiffle and glam—Stanley teases out the connections and tensions that animate the pop charts and argues that the charts are vital social history.

Yeah! Yeah! Yeah! is like the world’s best and most eclectic jukebox in book form. All the hits are here: the Monkees, Metallica, Patsy Cline, Patti Smith, new wave, New Order, “It’s the Same Old Song,” The Song Remains the Same, Aretha, Bowie, Madonna, Prince, Sgt. Pepper, A Tribe Called Quest, the Big Bopper, Fleetwood Mac, “Itsy Bitsy Teenie Weenie Yellow Polka Dot Bikini,” Bikini Kill, the Kinks, Mick Jagger, Michael Jackson, Jay-Z, and on and on and on. This book will have you reaching for your records (or CDs or MP3s) and discovering countless others.

For anyone who has ever thrilled to the opening chord of the Beatles’ “A Hard Day’s Night” or fallen crazy in love for Beyoncé, Yeah! Yeah! Yeah! is a vital guide to the rich soundtrack of the second half of the twentieth century.

Bob Stanley has worked as a music journalist, DJ, and record-label owner, and is the cofounder and keyboard player for the band Saint Etienne. He lives in London.

Rich with musical history lived, worked, and felt, with dozens more chapters and digressions that pay pop its due…Yeah! Yeah! Yeah! is smart, funny, surprisingly deep for just how broad it is, but, most of all, for stars and songs great and small, it is full of love.

A landmark celebration, rumination and encapsulation of just about everything worth knowing—and arguing—about the pop landscape… A book for the ages.
— Matt Damsker - USA Today

Like War and Peace but with a beat… Endlessly readable… [Stanley's] passion and humor make Yeah! Yeah! Yeah! a delicious read even, or rather especially, when it upends your own views.

[Stanley is] as clear-eyed about music as he is crazy in love with it.
— Mikael Wood - Los Angeles Times

An immensely entertaining pop-music survey course. [Stanley] is engagingly opinionated and often very, very funny… The assemblage of irresistible, bite-size histories of top-of-the-charts stars is joyful, smart, and addictive, just like the best pop songs, and a must for music fans everywhere.
— Booklist, Starred review

Bob Stanley loves and finds surprising connections between a thousand kinds of pop. He makes me want to run to the nearest record store—and move in.
— Stephin Merritt of the Magnetic Fields

Yeah! Yeah! Yeah! ties together the disparate strands of pop’s shape-shifting history to create a vivid living document of the music of our lives.

This book will be remembered and deserves to be.
— Robert Christgau - Barnes & Noble Review

Quixotic and kaleidoscopic, Yeah! Yeah! Yeah! serves up erudite irreverence on every page. Like its sprawling subject, it invites everyone in for a listen.

Tells the story of American and British pop music almost as engagingly as the songs themselves.
— Glenn Gamboa - Newsday

Zips through decades of dance tunes and teenage heartthrobs with an affectionate ebullience… As good ‘a story of pop music’ as a fan could hope for.
— Ryan Little - Washington Post

[An] exuberant celebration of the silly and the sublime… [Stanley’s] writing delights and surprises, and his description of the music makes you want to dance to it.
— Sarah Larson - The New Yorker

{A] Roller-coaster ride through pop history… encourages readers to look deeper into offshoots of ‘pop’ and performers they might not be so familiar with.
— Bob Ruggiero - Houston Press