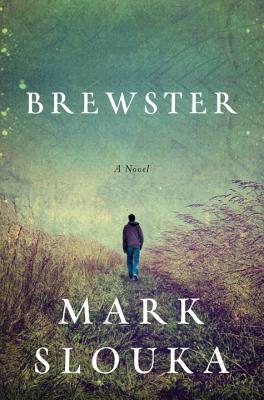 Brewster, by Mark Slouka will be out in August 2013, and I just can't wait to hear everyone's reaction. This is a beautiful, sorrowful tribute to that too short window of time when friendships are the core of life and their brilliance is everything - survival, love, escape, and hope. Living in the late 60s in upstate NY, John and Ray are still in high school, and only 16, but their youths have been seriously short changed by innocence. Like the foreboding poetry in a favorite rock song, you know from the first compelling lines that this is going to bring you to your knees, and it does.

I hope Brewster escapes being categorized as a "coming of age story" - which would not be inaccurate, but a kind of travesty given its grander reach.

If I were a novel I would want to be Brewster.

A coming of age story, but so much more - an invitation to live in the hearts of four teens in a blue-collar town in the late 1960s. The writing is spare yet evocative, brimming with touchstones that evoke the common threads of experience running through us all. Highest recommendation. — Erik Barnum

Hands down the best novel I've read this year. Set in Vietman-era upstate New York, the story follows the friendship of two high school kids - a fighter and a runner - as they navigate the time, their dysfunctional families, and life in general. Billed as coming-of-age story, Brewster is a lot more than that; a rough story with a lot of sadness, a lot of hope and an uplifting overall message: even if you lose the race, run it anyway. — Sarah Walcott

A haunting confessional of a novel that is heartbreaking and authentic. In the late '60s a small band of high school friends struggle for their versions of freedom while they struggle to endure. — Stan Hynds

“This is such a well written and well thought out book you will be drawn in from the first page. It is Brewster, New York, 1968, the peak of the Vietnam War, and 16 year old Jon Mosher, son of Jewish immigrants that escaped Europe in WW2 is searching for escape from a dead-end town and his guilt from his older brother's death. He meets Ray Cappicciano and together they struggle to make sense of their quickly changing world. Jon discovers his strength running track with his high school team, and Ray finds his strength in the fighting arena. Raw and brutal at times this poignant story's well drawn characters stay with you well after the book is closed. This will be among my top books for 2013.”
— Helen Markus, HearthFire Books of Evergreen, Evergreen, CO

A powerful story about an unforgettable friendship between two teenage boys and their hopes for escape from a dead-end town.

The year is 1968. The world is changing, and sixteen-year-old Jon Mosher is determined to change with it. Racked by guilt over his older brother’s childhood death and stuck in the dead-end town of Brewster, New York, he turns his rage into victories running track. Meanwhile, Ray Cappicciano, a rebel as gifted with his fists as Jon is with his feet, is trying to take care of his baby brother while staying out of the way of his abusive, ex-cop father. When Jon and Ray form a tight friendship, they find in each other everything they lack at home, but it’s not until Ray falls in love with beautiful, headstrong Karen Dorsey that the three friends begin to dream of breaking away from Brewster for good. Freedom, however, has its price. As forces beyond their control begin to bear down on them, Jon sets off on the race of his life—a race to redeem his past and save them all.


Mark Slouka's work has been called "relentlessly observant, miraculously expressive" (New York Times Book Review). Reverberating with compassion, heartache, and grace, Brewster is an unforgettable coming-of-age story from one of our most compelling novelists.

Mark Slouka’s most recent books are the story collection All That Is Left Is All That Matters, the memoir Nobody’s Son, and the award-winning novel Brewster. His work has appeared in The Best American Short Stories, The Best American Essays, and the PEN / O. Henry Prize Stories. He lives in Prague.

Reading Brewster is like entering the very heart of a Bruce Springsteen song—all grace, all depth, all sinew. Slouka—one of the great unsung writers of our time—has written a magnificent novel that woke my tired heart.

Terrific…. [W]here Slouka distinguishes himself as an author of particular sensitivity and significance is in how accurately and memorably he is able to conjure up a particular mood that has no doubt been felt in every era, not just the late '60s and early '70s. There is a timeless sense of yearning here.
— Adam Langer - Boston Globe

The dark undertow of Slouka’s prose makes Brewster instantly mesmerizing, a novel that whirls the reader into small-town, late 1960s America with mastery, originality, and heart.

— Jennifer Egan, Pulitzer Prize–winning author of A Visit from the Goon Squad

Evocative… gorgeously written… both spare and highly dramatic. Slouka has an exceptional ear for the way kids talk, an eye for the detail of a not-so-recent past …. In Brewster, Slouka creates a messy miniature. It's a tight, little world where …the subjects—human frailty, friendship, yearning, heart and love—don't make for easy poses. And you can't take your eyes from it.

If ecstasy was Nabokov’s keynote, Slouka’s is passion. I can think of no one else who writes with such brazen fervor, with so much heart poured into every line. He is the perfect writer for a Passion Play about youth: youth’s ardor, youth’s anguish, youth’s nakedness. Brewster is that novel, and it blazes.

This beautifully written coming-of-age story sings with wisdom and heart. Slouka’s characters struggle to survive against a backdrop of remembered pain, routine violence and the threat of being drafted to Vietnam, fighting to retain a friendship that may just be able to save them.
— Bonnie Jo Campbell, author of Once Upon a River

[A] novel of stark and brutal truths…[Brewster] culminates in a scene of such visceral power and narrative force that this reader was left breathless. But perhaps Slouka's greatest accomplishment is his ability to blend his own authorial voice with the dialogue of his characters. It's as if the conversations that pass between Jon and Ray and Karen - about music, their plans for the future, their love and devotion to each other—are the lyrics to Slouka's melody. And what a beautiful and redemptive song it is.

What Slouka also draws, with unerring accuracy, is the primacy of friendship and loyalty among teens who feel they are powerless. Slouka gives them a voice here, one filled with equal parts humor and pain.
— Booklist, Starred Review

Despite delving bravely into despairingly dark subject matter, [Brewster] is still somehow infused with hope and light, achieving a sort of literary chiaroscuro.… Brewster could become the latest addition to the American canon of coming-of-age stories, enchanting readers with its soulful story of love, loss and the vagaries of the teenage heart.

Brewster is subtly wrought and wholly moving, capturing with beautiful desperation the sense of personal insecurity overshadowed by an era of unwieldy international concerns.

One to devour… fans of Richard Russo novels or Chad Herbach’s The Art of Fielding should love this novel.

A masterpiece of winter sorrow… Slouka’s real triumph here is capturing the amber of grief, the way love and time have crystallized these memories into something just as gorgeous as it is devastating.
— Ron Charles - Washington Post