Saving Italy: The Race to Rescue a Nation's Treasures from the Nazis (Hardcover) 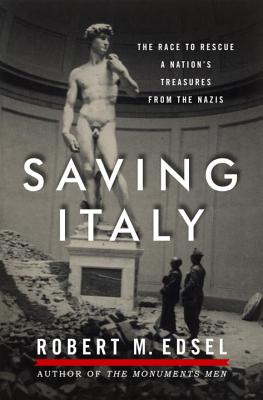 By Robert M. Edsel
Call or email to see if a used copy is available.
Out of Print

Edsel shows how a special Allied arts unit tracked down Italy’s hidden art treasures, preventing the Nazis from shipping them to Germany. A sequel to his fascinating The Monuments Men and just as absorbing. — Louise Jones

A great sequel to the story of The Monuments Men - smaller in territorial coverage, great in devastation and rich in adventure. This is a real treasure hunt!

"A poignant, fascinating story, bringing to life the soldier-scholars who saved Italy's treasures."—Evan Thomas, best-selling author of Ike’s Bluff and Sea of Thunder

When Hitler’s armies occupied Italy in 1943, they also seized control of mankind’s greatest cultural treasures. As they had done throughout Europe, the Nazis could now plunder the masterpieces of the Renaissance, the treasures of the Vatican, and the antiquities of the Roman Empire.


On the eve of the Allied invasion, General Dwight Eisenhower empowered a new kind of soldier to protect these historic riches. In May 1944 two unlikely American heroes—artist Deane Keller and scholar Fred Hartt—embarked from Naples on the treasure hunt of a lifetime, tracking billions of dollars of missing art, including works by Michelangelo, Donatello, Titian, Caravaggio, and Botticelli.

With the German army retreating up the Italian peninsula, orders came from the highest levels of the Nazi government to transport truckloads of art north across the border into the Reich. Standing in the way was General Karl Wolff, a top-level Nazi officer. As German forces blew up the magnificent bridges of Florence, General Wolff commandeered the great collections of the Uffizi Gallery and Pitti Palace, later risking his life to negotiate a secret Nazi surrender with American spymaster Allen Dulles.

Brilliantly researched and vividly written, Saving Italy brings readers from Milan and the near destruction of The Last Supper to the inner sanctum of the Vatican and behind closed doors with the preeminent Allied and Axis leaders: Roosevelt, Eisenhower, and Churchill; Hitler, Göring, and Himmler.

An unforgettable story of epic thievery and political intrigue, Saving Italy is a testament to heroism on behalf of art, culture, and history.

Robert M. Edsel is the best-selling author of The Monuments Men and Rescuing da Vinci and co-producer of the award-winning documentary film The Rape of Europa. Edsel is also the founder and president of the Monuments Men Foundation, a recipient of the National Humanities Medal, and a trustee at the National WWII Museum. After living in Florence for five years, he now resides in Dallas, Texas.

Edsel’s knowledge and appreciation of art amplifies this celebration of the unheralded group of men who ensured the safety of Italy’s greatest treasures.
— Kirkus Reviews

Saving Italy is an astonishing account of a little known American effort to save Italy’s vast store of priceless monuments and art during World War II. While American warriors were fighting the length of the country, other Americans were courageously working alongside to preserve the irreplaceable best of Italy’s culture. Read it and be proud of those who were on their own front lines of a cruel war.

Revealing…. That the Monuments Men were able to do as much as they did, amid a war with more urgent priorities is remarkable….
— Hugh Eakin - The Wall Street Journal

Robert Edsel has written a captivating, and at times hair-raising, book on the audacious Allied effort during World War II to save the priceless art treasurers in Italy. It is impossible to imagine what Western civilization would be today without these cultural masterpieces. Edsel has written a gripping, heroic story of the Monuments Men who saved them from certain destruction.
— Susan Eisenhower

Saving Italy is a teeming work…by an author passionate about his subject.

Edsel’s recovery of the history of the Monuments Men makes for a remarkable and fascinating story. As more recent conflicts have shown, the havoc that war can wreak upon our artistic heritage has unfortunately not diminished and there are important lessons in this book for policy makers and all who care about the preservation of the world’s artistic legacy for future generations.
— Timothy Potts, Director, the J. Paul Getty Museum

As Robert Edsel shows us in this valuable book, the artistic patrimony of the western world was a hostage to Hitler’s legions in 1945. Saving Italy rescues an unlikely troop of American heroes from obscurity, chronicling the exploits of a band of art professors working for the U.S. military as they saved Tuscany’s masterworks, museums and cathedrals from oblivion as Nazi Germany’s southern flank crumbled.

Robert Edsel weaves a suspenseful tale worthy of an Indiana Jones plot. He pulls you into a dangerous web of intrigue in which the Vatican, top German SS generals, American OSS operatives and Italian officials are entwined in top-secret negotiations to end the war. A must read for any WWII history enthusiast.
— Gordon H. “Nick” Mueller, President/CEO, The National WWII Museum

An amazing story, superbly told. The narrative and research are exceptionally well done. Edsel has done a great service not only to tell the story of the Monuments Men and the work they did in Italy but also to remind mankind what the Germans did. I believe that Saving Italy is a major contribution to the history of World War II.

— Carlo D’Este, bestselling author of Patton: A Genius For War

Eventually the deranged plots of the Nazis called forth a new breed of adversary, their college degrees in art and antiquities hardly imposing yet suddenly critical, their extraordinary confrontation with evil quickly proving capable, in this inspired account, of recasting the war in Italy into a barn-burner of a history.
— Hugh Ambrose, bestselling author of The Pacific

Edsel is very good on how the officers charged with identifying what had happened to Italy’s art went about their work. He gives a vivid flavor of what life must have been like as they searched among the ruins.
— Alsadair Palmer - The Mail on Sunday