The Shallows: What the Internet Is Doing to Our Brains (Hardcover) 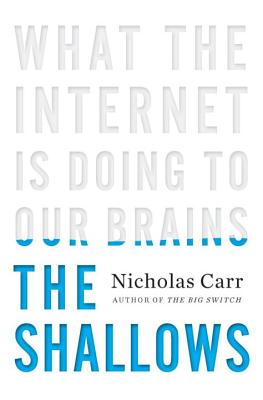 Carr magnificently puts forth the case that the use of The Internet has indeed changed our brain. Not since the book itself became available to all, has our brain experienced such a shift. Backed by scientific studies that are ongoing, he articulates what is gained (multi-tasking, access to massive amounts of information, group connectivity) and what is lost (deep reading, original thought, imagination and empathy). Finally he makes the point that the online world is here to stay and that we must all be mindful of the consequences. — Karen Frank

Finalist for the 2011 Pulitzer Prize in General Nonfiction: “Nicholas Carr has written a Silent Spring for the literary mind.”—Michael Agger, Slate

“Is Google making us stupid?” When Nicholas Carr posed that question, in a celebrated Atlantic Monthly cover story, he tapped into a well of anxiety about how the Internet is changing us. He also crystallized one of the most important debates of our time: As we enjoy the Net’s bounties, are we sacrificing our ability to read and think deeply?

Now, Carr expands his argument into the most compelling exploration of the Internet’s intellectual and cultural consequences yet published. As he describes how human thought has been shaped through the centuries by “tools of the mind”—from the alphabet to maps, to the printing press, the clock, and the computer—Carr interweaves a fascinating account of recent discoveries in neuroscience by such pioneers as Michael Merzenich and Eric Kandel. Our brains, the historical and scientific evidence reveals, change in response to our experiences. The technologies we use to find, store, and share information can literally reroute our neural pathways.

Building on the insights of thinkers from Plato to McLuhan, Carr makes a convincing case that every information technology carries an intellectual ethic—a set of assumptions about the nature of knowledge and intelligence. He explains how the printed book served to focus our attention, promoting deep and creative thought. In stark contrast, the Internet encourages the rapid, distracted sampling of small bits of information from many sources. Its ethic is that of the industrialist, an ethic of speed and efficiency, of optimized production and consumption—and now the Net is remaking us in its own image. We are becoming ever more adept at scanning and skimming, but what we are losing is our capacity for concentration, contemplation, and reflection.

Part intellectual history, part popular science, and part cultural criticism, The Shallows sparkles with memorable vignettes—Friedrich Nietzsche wrestling with a typewriter, Sigmund Freud dissecting the brains of sea creatures, Nathaniel Hawthorne contemplating the thunderous approach of a steam locomotive—even as it plumbs profound questions about the state of our modern psyche. This is a book that will forever alter the way we think about media and our minds.

Nicholas Carr is the author of The Shallows, a Pulitzer Prize finalist, The Glass Cage, and Utopia is Creepy. He has written for the New York Times, the Wall Street Journal, Atlantic, and Wired. He lives in Massachusetts with his wife.

A must-read for any desk jockey concerned about the Web’s deleterious effects on the mind.
— Newsweek

Starred Review. Carr provides a deep, enlightening examination of how the Internet influences the brain and its neural pathways. Carr’s analysis incorporates a wealth of neuroscience and other research, as well as philosophy, science, history and cultural developments ... His fantastic investigation of the effect of the Internet on our neurological selves concludes with a very humanistic petition for balancing our human and computer interactions ... Highly recommended.
— Library Journal

This is a measured manifesto. Even as Carr bemoans his vanishing attention span, he’s careful to note the usefulness of the Internet, which provides us with access to a near infinitude of information. We might be consigned to the intellectual shallows, but these shallows are as wide as a vast ocean.
— Jonah Lehrer - The New York Times Book Review

The best book I read last year — and by “best” I really just mean the book that made the strongest impression on me — was The Shallows, by Nicholas Carr. Like most people, I had some strong intuitions about how my life and the world have been changing in response to the Internet. But I could neither put those intuitions into an argument, nor be sure that they had any basis in the first place. Carr persuasively — and with great subtlety and beauty — makes the case that it is not only the content of our thoughts that are radically altered by phones and computers, but the structure of our brains — our ability to have certain kinds of thoughts and experiences. And the kinds of thoughts and experiences at stake are those that have defined our humanity. Carr is not a proselytizer, and he is no techno-troglodyte. He is a profoundly sharp thinker and writer — equal parts journalist, psychologist, popular science writer, and philosopher. I have not only given this book to numerous friends, I actually changed my life in response to it.

This is a lovely story well told—an ode to a quieter, less frenetic time when reading was more than skimming and thought was more than mere recitation.
— San Francisco Chronicle

The Shallows isn’t McLuhan’s Understanding Media, but the curiosity rather than trepidation with which Carr reports on the effects of online culture pulls him well into line with his predecessor . . . Carr’s ability to crosscut between cognitive studies involving monkeys and eerily prescient prefigurations of the modern computer opens a line of inquiry into the relationship between human and technology.

The subtitle of Nicholas Carr’s The Shallows: What the Internet is Doing to Our Brains leads one to expect a polemic in the tradition of those published in the 1950s about how rock ’n’ roll was corrupting the nation’s youth ... But this is no such book. It is a patient and rewarding popularization of some of the research being done at the frontiers of brain science ... Mild-mannered, never polemical, with nothing of the Luddite about him, Carr makes his points with a lot of apt citations and wide-ranging erudition.

Nicholas Carr has written an important and timely book. See if you can stay off the web long enough to read it!
— Elizabeth Kolbert, author of Field Notes from a Catastrophe: Man, Nature, and Climate Change

Neither a tub-thumpingly alarmist jeremiad nor a breathlessly Panglossian ode to the digital self, Nicholas Carr’s The Shallows is a deeply thoughtful, surprising exploration of our “frenzied” psyches in the age of the Internet. Whether you do it in pixels or pages, read this book.

— Tom Vanderbilt, author, Traffic: Why We Drive the Way We Do (and What It Says About Us)

Nicholas Carr carefully examines the most important topic in contemporary culture—the mental and social transformation created by our new electronic environment. Without ever losing sight of the larger questions at stake, he calmly demolishes the clichés that have dominated discussions about the Internet. Witty, ambitious, and immensely readable, The Shallows actually manages to describe the weird, new, artificial world in which we now live.

— Dana Gioia, poet and former Chairman of the National Endowment for the Arts

The core of education is this: developing the capacity to concentrate. The fruits of this capacity we call civilization. But all that is finished, perhaps. Welcome to the shallows, where the un-educating of homo sapiens begins. Nicholas Carr does a wonderful job synthesizing the recent cognitive research. In doing so, he gently refutes the ideologists of progress, and shows what is really at stake in the daily habits of our wired lives: the re-constitution of our minds. What emerges for the reader, inexorably, is the suspicion that we have well and truly screwed ourselves.
— Matthew B. Crawford, author of Shop Class As Soulcraft

Ultimately, The Shallows is a book about the preservation of the human capacity for contemplation and wisdom, in an epoch where both appear increasingly threatened. Nick Carr provides a thought-provoking and intellectually courageous account of how the medium of the Internet is changing the way we think now and how future generations will or will not think. Few works could be more important.

— Maryanne Wolf, author of Proust and the Squid: The Story and Science of the Reading Brain