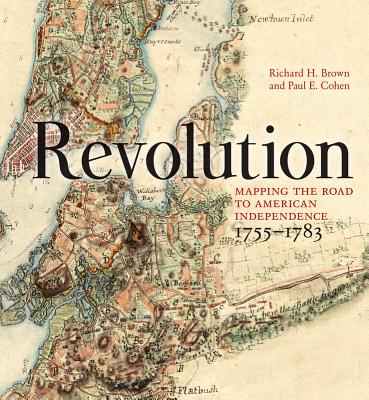 The spectacular legacy and importance of early American cartographers.

Historians of the Revolutionary War in America have been fortunate in their resources: few wars in history have such a rich literary and cartographic heritage. The high skills of the surveyors, artists, and engravers who delineated the topography and fields of battle allow us to observe the unfolding of events that ultimately defined the United States.

When warfare erupted between Britain and her colonists in 1775, maps provided graphic news about military matters. A number of the best examples are reproduced here, including some from the personal collections of King George III, the Duke of Northumberland, and the Marquis de Lafayette. Other maps from institutional and private collections are being published for the first time. In all, sixty significant and beautiful cartographic works from 1755 to 1783 illustrate this intriguing era.

Most books about the Revolution begin with Lexington and Concord and progress to the British surrender at Yorktown, but in this rich collection the authors lay the groundwork for the war by also taking into account key events of the antecedent conflict. The seeds of revolution were planted during the French and Indian War (1755–1763), and it was then that a good number of the participants, both British and rebel, cut their teeth. George Washington took his first command during this war, alongside the future British commanding General Thomas Gage.

At the Treaty of Paris, the French and Indian War ended, and King George III gained clear title to more territory than had ever been exchanged in any other war before or since. The British military employed its best-trained artists and engineers to map the richest prize in its Empire. They would need those maps for the fratricidal war that would begin twelve years later. Their maps and many others make up the contents of this fascinating and beautiful book.

Richard H. Brown is a collector of maps and views of the French and Indian War and American Revolution. He is vice chairman of the Norman B. Leventhal Map Center at the Boston Public Library and serves as a councilor of the American Antiquarian Society. He is also a member of the Madison Council of the Library of Congress and the Library Committee of the New-York Historical Society.

Since I can't imagine the library of a map aficionado, historian, armchair warrior or institution functioning without Revolution, I'd say this is THE book on Revolutionary War era maps. Period.

For both casual readers and experienced researchers, Revolution: Mapping the Road to American Independence is as fine a compilation of cartographic material as any available today.

Oversized, ideal for the coffee table and a curious mind, this glorious book has immense appeal.
— Douglas Lord - Library Journal

The excellent supporting artwork and Brown and Cohen’s elegant text help place these works in perspective in terms of both the development of the war from Fort Duquesne to Yorktown and the rise of modern mapmaking through the persons of unwitting heroes like Col. John Montresor, ‘the most able British soldier who served during the French and Indian War and the American Revolution’…Essential for students of the Revolutionary era and a pleasure for cartography buffs.
— Kirkus Reviews

Revolution is a dazzling achievement that casts new light on the imperial wars of the late eighteenth century. These maps—many of them rare manuscripts, reproduced here for the first time—remind us that the battle for (and against) American independence unfolded in space as well as in time. Here the long road to revolution becomes visible as a hard-fought contest over territory as well as clash of ideals. A feast for the eye, Revolution also invites fresh thinking about the founding of the United States and Britain’s American War.

— Jane Kamensky, Professor of History, Harvard University, and Carly and Lily Pforzheimer Foundation Director of the Schlesinger Library for the History of Women in America

This glorious collection—ravishingly beautiful, exquisitely curated, brilliantly annotated—is one of the most graphic and illuminating treatments of the American Revolution ever brought to press. Here is the road to revolution and the war itself, from the opening of the French and Indian War in 1755 to the surrender at Yorktown in 1781 and the Treaty of Paris two years later. Combining the virtues of an historical atlas, a luscious exhibition, and a detailed but concise history of the wars, it is a GPS to the American Revolution.
— Ric Burns, documentary filmmaker, Steeplechase Films

This beautiful book, with its superbly reproduced images, brings to life the decades leading to the birth of the U.S.A. The authors have given a highly skilled analysis of the background, contents and significance of the images. The readable style and brilliant use of little-known cartographical works has created a book that anyone with an interest in the interplay between maps and history should buy—and read.
— Peter Barber, head of Map Collections, the British Library