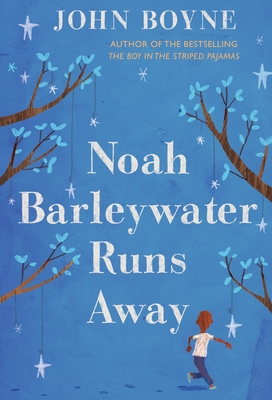 When Noah realizes that he has only made "five major accomplishments" by the time he is eight, he decides to run away in search of adventure. Struck by guilt, regret, and hunger, he befriends a puppetmaker along the way--who weaves a story powerful enough to remind Noah exactly what he's running away from--and why he must return immediately. Poignant and sad, this book will be remembered by all children--and teens--who meet Noah and his troubled family. (Middle Reader) — Aubrey Restifo

Noah thinks his problems would be easier if he doesn’t think about them. So, he runs away. Going through village after village until he finds himself deep in a forested area. Here is where he finds a toyshop, with amazing toys. And an unusual toymaker. A toymaker with a very amazing story to tell. — Jeanette

“Noah, age eight, runs away from a difficult reality at home to a fatasyland where trees scold him and animals talk. He finds a toy shop in which all the toys are made of wood, including row upon row of puppets. The old and engaging shop owner tells his own story, and through gentle, savvy, and wise dialogue leads Noah to return home. This allegory confronts the issues of fantasy and reality, immortality and mortality, and what it means to be human, all in a very fine read.”
— Joyce Miller, Baker Books, North Dartmouth, MA

Eight-year-old Noah's problems seem easier to deal with if he doesn't think about them. So he runs away, taking an untrodden path through the forest.

Before long, he comes across a shop. But this is no ordinary shop: it's a toyshop, full of the most amazing toys, and brimming with the most wonderful magic. And here Noah meets a very unusual toymaker. The toymaker has a story to tell, and it's a story of adventure and wonder and broken promises. He takes Noah on a journey. A journey that will change his life.

JOHN BOYNE was born in Ireland in 1971 and is the author of six novels for adults. His first novel for children, The Boy in the Striped Pajamas, won two Irish Book Awards, was shortlisted for the British Book Award and has been made into a film. His novels are published in over 30 languages. He lives in Dublin. Visit him on the Web at JohnBoyne.com.

OLIVER JEFFERS is an internationally acclaimed author-illustrator. His first picture book, How to Catch a Star (HarperCollins) was published in 2004 and since then he has created a further five picture books to much critical acclaim. He has won the Irish Book Award (where he first met John Boyne), the Blue Peter Book of the Year and the Nestlé Children's Book Prize as well as a host of shortlistings including the prestigious Kate Greenaway Medal. His books have been translated into 19 languages. To learn more about him and his work, please visit OliverJeffers.com.