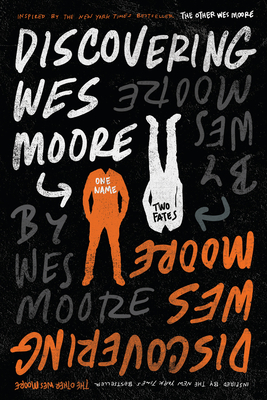 From the governor-elect of Maryland comes a story of two fatherless boys from Baltimore, both named Wes Moore. One is in prison, serving a life sentence for murder. The other is a Rhodes Scholar, an army veteran, and an author whose book is being turned into a movie produced by Oprah Winfrey.

The story of “the other Wes Moore” is one that the author couldn’t get out of his mind, not since he learned that another boy with his name—just two years his senior—grew up in the same Baltimore neighborhood. He wrote that boy—now a man—a letter, not expecting to receive a reply. But a reply came, and a friendship grew, as letters turned into visits and the two men got to know each other. Eventually, that friendship became the inspiration for Discovering Wes Moore, a moving and cautionary tale examining the factors that contribute to success and failure—and the choices that make all the difference.

Two men. One overcame adversity. The other suffered the indignities of poverty. Their stories are chronicled in Discovering Wes Moore, a book for young people based on Wes Moore’s bestselling adult memoir, The Other Wes Moore.

“Moore wisely opens the door for teens to contemplate their own answers and beliefs, while laying out his own experiences honestly and openly.”—Publishers Weekly

“He argues earnestly and convincingly that young people can overcome the obstacles in their lives when they make the right choices and accept the support of caring adults.”—Kirkus Reviews

Wes Moore is the governor-elect of Maryland. He is the New York Times bestselling author of The Other Wes Moore; The Work, which was featured on Oprah Winfrey’s SuperSoul Sunday; and Five Days, a finalist for the Porchlight Business Book Award. He’s also a former Rhodes Scholar, a combat veteran of Afghanistan, and a social entrepreneur who served as the CEO of the Robin Hood Foundation, one of the largest antipoverty organizations in the country. Wes Moore lives in his hometown of Baltimore with his wife and two children.

"This adaptation . . . makes for a hopeful and inspiring story."--Kirkus Reviews


Praise for The Other Wes Moore: One Name, Two Fates

“Moore vividly and powerfully describes not just the culture of the streets but how it feels to be a boy growing up in a world where violence makes you a man.”—O: The Oprah Magazine