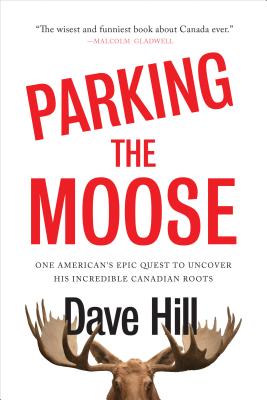 Hill is a hoot as he traces his marginal Canadian heritage in a series of North of the Border jaunts. There's loads of Canadian characters, cold Canadian weather, Canadian souvenirs, Canadian heavy metal, and that tasty Canadian delicacy: poutine.

A quarter-Canadian from Cleveland explores his roots--and melts your face with joy.

There's an idea most Americans tend to learn as children. The idea that their country is the "best." But this never stuck with Dave Hill, even though he was born and raised in Cleveland, Ohio. His grandfather, you see, was from Canada (Clinton, Ontario, to be exact). And every Sunday at dinner he'd remind Dave and anyone else within earshot that it was in fact Canada, this magical and mysterious land just across the mighty Lake Erie, that was the "best."

It was an idea that took hold. While his peers kept busy with football, basketball and baseball, hockey became the only sport for Dave. Whenever bacon was served at home, he'd be sure to mention his preference for the Canadian variety. Likewise, if a song by Triumph came on the radio, he'd be the first to ask for it to be cranked up as loud as it would go. And he was more vocal about the vast merits of the Canadian healthcare system than any nine-year-old you'd ever want to meet. (That last part is a lie, but hopefully it makes the point that he was so into Canada that it was actually kind of weird.)

In later years he even visited Canada a couple of times. But now, inspired by a publisher's payment of several hundred dollars (Canadian) in cash, he has travelled all over the country, reconnecting with his heritage in such places as Montreal, Moose Jaw, Regina, Winnipeg, Merrickville and of course Clinton, Ontario, meeting a range of Canadians, touching things he probably shouldn't and having adventures too numerous and rich in detail to be done justice in this blurb.

The result, he promises, is "the greatest Canada-based literary thrill ride of your lifetime."

DAVE HILL is a comedian, writer, musician, actor, radio host and man-about-town originally from Cleveland, Ohio, but now living in New York City in a totally sweet apartment with a party deck and everything. He is the author of two previous books, Tasteful Nudes and Dave Hill Doesn't Live Here Anymore, and has written for The New York Times, GQ, Salon, The Paris Review, McSweeney's, The New York Observer, The Cleveland Plain Dealer, VICE, Guitar World and a bunch of other places. Comedy legend Dick Cavett called Dave "a major figure among American comic writers, past and present," which is pretty much the coolest thing that has ever happened as far as Dave is concerned. Dave has appeared on such TV shows as Inside Amy Schumer and Full Frontal with Samantha Bee, hosted for HBO and Cinemax, and performed live comedy around the world. He hosts The Goddamn Dave Hill Show on the WFMU radio station in Jersey City every Monday night. Dave is a frequent contributor to public radio's This American Life. He is also a musician who currently sings and plays guitar in the psych/garage rock band Painted Doll, the extremely extreme Norwegian black metal band Witch Taint, and the power pop band Valley Lodge, whose song "Go" is the theme to HBO's Last Week Tonight with John Oliver.

"Who could have guessed that the wisest and funniest book about Canada ever would be written by a comedian and badass guitar hero from Cleveland, Ohio?" —Malcolm Gladwell

"Dave Hill is one of the most hilarious non-Canadian, non-women that I know." —Samantha Bee

"One of the genuinely cherished days of my year is the day a new book by Dave Hill comes out. Mercifully, for those of us who find the usual wait for a favourite author a trial, Hill has delivered his latest work of laugh-out-loud, expert humour in the nick of time. . . . If you're looking for an ideal book that makes you turn down soirées and tweetable events just so you can stay home and chortle, then Dave Hill's Parking the Moose is exactly what you need." —Dick Cavett

"Dave Hill rocks! His book is a fun ride through Canada. Jump on board and give it a read." —Randy Bachman

"When I was a little kid, my American cousins would make me say the phrase 'out and about' over and over again so they could laugh hysterically at my Canadian accent. I wish this book had been available to them. It's a whole lot funnier than 'oot and aboot,' and they might have even learned something about their great neighbours to the north." —Stephen Brunt

"I laughed a lot reading this book, I gotta tell ya. It's very well done." —Steve Paikin, The Agenda, TVO

"I loved your book. Laughed out loud. And it takes a lot, actually, to make me laugh out loud." —Mutsumi Takahashi, CTV News Montreal

"I was laughing out loud on many occasions in your book. It's incredibly funny." —Jeff McArthur, The Morning Show, Global Television.