When Truth Is All You Have: A Memoir of Faith, Justice, and Freedom for the Wrongly Convicted (Hardcover) 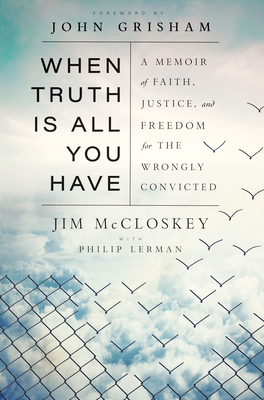 McCloskey has dedicated his life trying to free prisoners languishing on death row after being railroaded by the system. His Centurion Ministries is faith-based, but McCloskey is no Mother Teresa: he freely fesses up to his failings, affairs, and his often profound doubt of the power of prayer in the face of brutal injustice. — Mike Hare

“A riveting and infuriating examination of criminal prosecutions, revealing how easy it is to convict the wrong person and how nearly impossible it is to undo the error.” —Washington Post

"No one has illuminated this problem more thoughtfully and persistently." —Bryan Stevenson, author of Just Mercy

Jim McCloskey was at a midlife crossroads when he met the man who would change his life. A former management consultant, McCloskey had grown disenchanted with the business world; he enrolled at Princeton Theological Seminary at the age of 37. His first assignment, in 1980, was as a chaplain at Trenton State Prison. Among the inmates was Jorge de los Santos, a heroin addict who'd been convicted of murder years earlier. He swore to McCloskey that he was innocent—and, over time, McCloskey came to believe him. With no legal or investigative training to speak of, McCloskey threw himself into the case. Two years later, thanks to those efforts, Jorge de los Santos walked free, fully exonerated.

McCloskey had found his calling. He established Centurion Ministries, the first group in America devoted to overturning wrongful convictions. Together with his staff and a team of forensic experts, lawyers, and volunteers—through tireless investigation and an unflagging dedication to justice—Centurion has freed 63 innocent prisoners who had been sentenced to life or death.

When Truth Is All You Have is McCloskey's inspirational story, as well as those of the unjustly imprisoned for whom he has fought. Spanning the nation, it is a chronicle of faith and doubt; of triumphant success and shattering failure. It candidly exposes a life of searching and struggle, uplifted by McCloskey's certainty that he had found what he was put on earth to do.

Filled with generosity, humor, and compassion, it is the soul-bearing account of a man who has redeemed innumerable lives—and incited a movement—with nothing more than his unshakeable belief in the truth.

JIM McCLOSKEY is the founder of Centurion Ministries. He served in the U.S. Navy, patrolling rivers in the Mekong Delta of Vietnam, and spent twelve years in international consulting. He has a Masters of Divinity from Princeton Theological Seminary. Today McCloskey is retired from active oversight of Centurion, though he continues to serve on the board and pursue cases.

PHILIP LERMAN has been the national editor of USA Today, co-producer of "America's Most Wanted," and executive producer of PBS's "Made in Spain." He is the author of Dadditude and co-author of numerous nonfiction books.

“[Exoneration] takes an advocate who is tireless, fearless, and dedicated to justice. A man like Jim McCloskey, the dean of all innocence advocates—The Exonerator”
—from the foreword by John Grisham

"Jim McCloskey is one of the foremost voices in the struggle to exonerate the wrongly convicted, and When Truth is All You Have is a poignant, piercing, and ultimately inspiring account of a life of sacrifice.  Whether it's to the people he serves or to a more just criminal justice system, Jim McCloskey's devotion is a beacon of hope."
—Sister Helen Prejean, CSJ, author of Dead Man Walking

“A riveting and infuriating examination of criminal prosecutions, revealing how easy it is to convict the wrong person and how nearly impossible it is to undo the error. [This book] upends our naive and complacent view of prosecutions…. Full of drama and hope…. In no small part because of McCloskey’s work, Americans have radically reassessed the criminal justice system…. We need many more Jim McCloskeys.”
—Washington Post

“Jim McCloskey and Centurion are pioneers in the struggle to expose the tragedy of innocent people wrongly convicted and sent to prison in America...No one has illuminated this problem more thoughtfully and persistently than Rev. McCloskey and his extraordinary team at Centurion.  There are important stories we have yet to hear about what we’ve done in America and no one is better positioned to tell them than Jim McCloskey.”
—Bryan Stevenson, author of Just Mercy

“Jim McCloskey, the godfather of the innocence movement, changed the way we think about crime and punishment...[This book] is fascinating.”
—Texas Monthly

“Though generally broaching serious subjects, the writers are able to bring levity at appropriate moments, reflecting McCloskey’s overall philosophy of hope...This will be essential for collections focused on social justice, the wrongly convicted, and spiritual transformation.”
—Library Journal  (starred review)