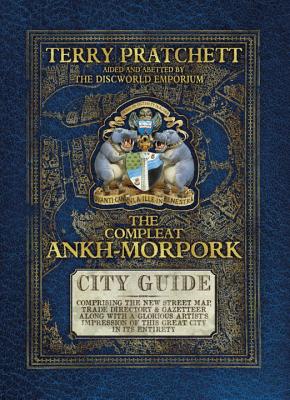 Fans of Discworld know it would be unwise (and unhealthy) to get lost in the city of Ankh-Morpork so give them this great street directory which highlights all of the local businesses, attractions, and districts; with Pratchett's usual wit plus an illustrated pull-out map.

Greetings, adventurer! We lay before you this most comprehensive gazetteer encompassing all the streets of Ankh-Morpork, as well as information on its principal businesses, hotels, taverns, inns, and places of entertainment and refreshment, enhanced by the all-new and compleat map of our great city state.

Our city has grown well beyond its ancient walls, but the remit of this commission from the honourable Guild of Merchants was to ‘map the city’, the pulsing organ of commerce and culture, the heart as opposed to the body, and this we have done. In spades.

We ask that when you pore over this glorious work you spare some thought for the humble cartographers and surveyors who made journeys into the darker corners of our metropolis – no less dangerous than the wilds of Skund or Bhangbhangduc. To some the only memorial is the map you now possess. Others, in their quest for knowledge, paid the highest price that scholarship demands, which is to say, a day off in lieu.

And so we dedicate this map and these accompanying words to the officers, councilors and members of the Merchants’ Guild and to all who will find in its pages paths yet to tread and places yet to explore within the magnificentbwonder that is the city of Ankh-Morpork.

Terry Pratchett was the acclaimed creator of the global bestselling Discworld series, the first of which, The Colour of Magic, was published in 1983. In all, he was the author of over fifty bestselling books which have sold over 100 million copies worldwide. His novels have been widely adapted for stage and screen, and he was the winner of multiple prizes, including the Carnegie Medal. He was awarded a knighthood for services to literature in 2009, although he always wryly maintained that his greatest service to literature was to avoid writing any.

• "You'd have thought that, by now, Pratchett would be running out of ideas; thankfully, however, the universe he created 25 years ago just keeps on giving... It's a triumphant effort." --Independent on Sunday