The Prince of Risk (Hardcover) 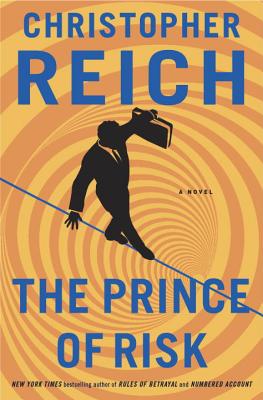 New York hedge fund manager Bobby Astor discovers a sinister plot to attack the United States from two directions. Our financial system is about to be demolished while New York is attacked by a group of mercenaries. Astor investigates and what he finds makes an entertaining read. — Sarah Knight

At the crossroads of high finance and international terrorism, a New York hedge-fund manager searches for the truth behind his father’s murder.

The master of the financial thriller returns.

“Christopher Reich is a superstar.”—Lee Child


Bobby Astor is a fearless New York hedge-fund gunslinger on the verge of making his biggest killing ever. But everything changes when his father, the venerable chief executive of the New York Stock Exchange, is murdered along with the head of the Federal Reserve in a brazen, inexplicable attack on the South Lawn of the White House. In the moments before his death, Astor’s father sends Bobby a mystifying text message . . . a single word that Bobby soon realizes offers the only clue to the identity of his father’s killer and the terrifying motivation behind the attack.
As Bobby unravels the mystery behind his father’s death, he crosses paths with his ex-wife, no-nonsense Special Agent Alex Forza of the FBI, who is hot on the trail of a band of elite international terrorists intent on infiltrating New York City. All the while, Bobby must fight to hold together his increasingly risky business deal. At stake is not only the survival of his company and a colossal fortune . . . but also a sophisticated foreign conspiracy that threatens the entire financial system of the United States.
The Prince of Risk is Christopher Reich’s most prescient, suspenseful, and entertaining thriller, a novel that anticipates the headlines of the near future and shows, once again, why The New York Times calls Reich “the John Grisham of Wall Street.”

CHRISTOPHER REICH is the "New York Times" bestselling author of "Numbered Account," "Rules of Deception," "Rules of Vengeance," "Rules of Betrayal, ""The Devil's Banker," and many other thrillers. His novel "The Patriots Club" won the International Thriller Writers award for Best Novel in 2006. He lives in Encinitas, California.

“The Prince of Risk is a terrific thriller, written by a guy who knows what he's doing. Check it out. I think you'll love it.”
--Steve Berry

"The Prince of Risk will knock your socks off.  Christopher Reich seamlessly weaves the high-stakes world of hedge funds and international terrorism into a frightening, big-time thriller that pulls you into his world and rockets ahead like a runaway train.  Reich knows how to deliver, and does."
--Robert Crais

"At the moment I'm reading a great new financial thriller by Christopher Reich, The Prince of Risk. One thing Doug [Preston] and I love to do in our books is come up with scary but credible near-future scenarios--and crafting just such scenarios is a talent Reich has in spades.”
--Lincoln Child

“A smart and sophisticated thriller.”
– The New York Times