Red on Red: A Novel (Paperback) 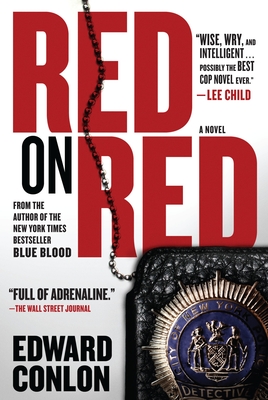 The author of the celebrated memoir Blue Blood (“May be the best account ever written of life behind the badge.” —Time) delivers a mesmerizing, relentless thriller that rings with the truth of what it takes to be an NYPD detective. Nick Meehan is introspective, haunted, and burned out on the Job. He is transferred to a squad in the upper reaches of Manhattan and paired with Esposito—a hungry, driven cop who has mostly good intentions but trouble following the rules. The two develop a fierce friendship that plays out against a tangle of mysteries: a hanging in a city park, a serial rapist at large, a wayward Catholic schoolgirl who may be a victim of abuse, and a savage gang war that erupts over a case of mistaken identity.

Red on Red captures the vibrant dynamic of a successful police partnership—the tests of loyalty, the necessary betrayals, the wedding of life and work. Conlon is a natural and perceptive storyteller, awake to the ironies and compromises of life on the Job and the beauty and brutality of the city itself.

Edward Conlon is a detective with the New York City Police Department. A graduate of Harvard, he has published articles in The New Yorker and Harper’s and his work has been included in The Best American Essays. He is the author of a memoir, Blue Blood, a finalist for the National Book Critics Circle Award, a New York Times Notable Book, and a New York Times bestseller.

“A big, daring, psychologically complex story—passionate and poignant, pulsating with authenticity and street smarts, yet lyrical and literary—this is the cop novel for everyone who reads books.”—Joseph Wambaugh

“Riveting . . . Conlon has used all-too-humane detectives, biting wit and the rhythmic slang of the streets to create a brilliant police novel.”—The Star-Ledger

“Conlon is a gifted writer, surefooted on this terrain, drawing on personal NYPD experience to immerse the reader in the job. . . . [Nick] Meehan is a powerful character, realistic in his wry, existentialist approach and deeply sympathetic.”—Kirkus Reviews (starred review)

Named One the Best Novels of the Year by Kirkus Reviews