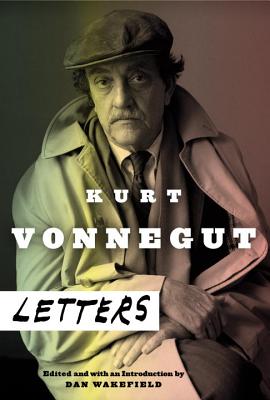 Vonnegut's letters are just as cutting and hilariously cynical as his writing, if not more so, because they are so honest. The reader gets a glimpse at the struggles he endured on the way to becoming the amazing writer we all know him to be. His life was full of false starts and many, many rejection letters. So it goes. — Krysta Piccoli

NAMED ONE OF THE BEST BOOKS OF THE YEAR BY
"Newsweek"/The Daily Beast - The Huffington Post" - Kansas City Star - Time Out New York - Kirkus Reviews"
This extraordinary collection of personal correspondence has all the hallmarks of Kurt Vonnegut's fiction. Written over a sixty-year period, these letters, the vast majority of them never before published, are funny, moving, and full of the same uncanny wisdom that has endeared his work to readers worldwide.
Included in this comprehensive volume: the letter a twenty-two-year-old Vonnegut wrote home immediately upon being freed from a German POW camp, recounting the ghastly firebombing of Dresden that would be the subject of his masterpiece "Slaughterhouse-Five;" wry dispatches from Vonnegut's years as a struggling writer slowly finding an audience and then dealing with sudden international fame in middle age; righteously angry letters of protest to local school boards that tried to ban his work; intimate remembrances penned to high school classmates, fellow veterans, friends, and family; and letters of commiseration and encouragement to such contemporaries as Gail Godwin, GUnter Grass, and Bernard Malamud.
Vonnegut's unmediated observations on science, art, and commerce prove to be just as inventive as any found in his novels--from a crackpot scheme for manufacturing "atomic" bow ties to a tongue-in-cheek proposal that publishers be allowed to trade authors like baseball players. ("Knopf, for example, might give John Updike's contract to Simon and Schuster, and receive Joan Didion's contract in return.") Taken together, these letters add considerable depth to our understanding of this one-of-a-kind literary icon, in both his public and private lives. Each letter brims with the mordant humor and openhearted humanism upon which he built his legend. And virtually every page contains a quotable nugget that will make its way into the permanent Vonnegut lexicon.
- On a job he had as a young man: "Hell is running an elevator throughout eternity in a building with only six floors."
- To a relative who calls him a "great literary figure" "I am an American fad--of a slightly higher order than the hula hoop."
- To his daughter Nanny: "Most letters from a parent contain a parent's own lost dreams disguised as good advice."
- To Norman Mailer: "I am cuter than you are."
Sometimes biting and ironical, sometimes achingly sweet, and always alive with the unique point of view that made him the true cultural heir to Mark Twain, these letters comprise the autobiography Kurt Vonnegut never wrote.
Praise for "Kurt Vonnegut: Letters"
"Splendidly assembled . . . familiar, funny, cranky . . . chronicling Vonnegut's] life in real time."--Kurt Andersen, "The New York Times Book Review"
" "
" This collection is] by turns hilarious, heartbreaking and mundane. . . . Vonnegut himself is a near-perfect example of the same flawed, wonderful humanity that he loved and despaired over his entire life."--"NPR"
"Congenial, whimsical and often insightful missives . . . one of Vonnegut's] very best."--"Newsday"
"These letters display all the hallmarks of Vonnegut's fiction--smart, hilarious and heartbreaking."--"The New York Times Book Review.

Dan Wakefield first befriended Kurt Vonnegut in 1963. Like Vonnegut, he was born and raised in Indianapolis. He is a novelist and screenwriter whose books include the bestselling "Going All the Way" and the memoir "New York in the Fifties."

“[This collection is] by turns hilarious, heartbreaking and mundane. . . . Vonnegut himself is a near-perfect example of the same flawed, wonderful humanity that he loved and despaired over his entire life.”—NPR

“Letters’ greatest gift is the gift of all such anthologies: It humanizes an icon. . . . The fallibility and kindness of the real person shine through clearer in his more personal writing, separating the author from the oeuvre in a way that makes both richer.”—The A.V. Club

“There are authors we admire or envy, but there are just a few we really, really love, and Vonnegut is one of them.”—The Washington Post

“Smart, funny, and very compassionate. Reading this is a must for fans of the author.”—The Christian Science Monitor

“Old correspondence from even famous writers can be a bore, but not Vonnegut’s. He was always at his best when adopting an intimate, down-to-earth tone, and the same animating force that made him a brilliant storyteller is evident again and again in these letters. . . . This is a frank and funny book, offering rich insights into Vonnegut’s character and career.”—The Dallas Morning News

“This miraculous volume of selected letters provides a moving and revelatory portrait of the famed author of Slaughterhouse-Five and Cat’s Cradle. . . . Fans will find the collection as spellbinding as Vonnegut’s best novels, and casual readers will discover letters as splendid in their own way as those of Keats.”—Publishers Weekly (starred review)

“A literary treasure . . . this collection of letters—many of which have never been published—rightly can be viewed as the autobiography Vonnegut never wrote.”—The Oklahoman

“[An] intimate, far-ranging monologue by one of the 20th century’s funniest, sharpest, darkest minds . . .  it’s difficult not to marvel at Vonnegut’s depth, warmth and wit. . . . Together, [the letters] give a comprehensive sketch of his personality. They show who he was and who he became.”—The Kansas City Star

“Bearing all the canny observations and sardonic witticisms that distinguished his most famous works [the letters reveal] fascinating insights into Vonnegut’s private thoughts and inspirations. . . . This is a volume fans will treasure.”—Booklist

“As these remarkable letters reveal, [Vonnegut] mixes hard-edged ideas with the buoyancy of imagination and humor. His best work makes us both gasp and laugh—wishing the fire from the Roman candle would never end.”—The Plain Dealer

“Letters mirrors some of Vonnegut’s best fiction . . .  wry, witty, and eminently quotable. Perhaps more importantly, his letters reflect a genuineness and humanity that always lived just beneath the surface of Vonnegut’s fiction.”—The Financialist

“Wit, aphorism, charm, wisdom and joshery abound here. . . . Vonnegut’s voice was as unique as his art. It is ominpresent here.”—Buffalo News

“Everything that’s familiar in [Vonnegut's] fiction is in the letters—he’s funny, caustic, sentimental, profound, melancholy, angry, and always himself.”—The Oregonian

“Tirelessly compiling letters and manuscripts from over seven decades of correspondence with his mentors, publishers, and even a school board director who banned his works, Wakefield finally gives the reader a sense of Vonnegut’s life without time travel or aliens to mystify and universalize his emotions. . . . Vonnegut is stripped of any possible self-promotion and his true affection and unselfishness shows. . . . a deep and true portrayal.”—The Daily Californian

“At last: the Vonnegut book readers of the late modern master have been waiting for. . . . It’s his voice again, live as ever, clear and unvarnished, with the pop and crackle of a hardwood fire on an Autumn night. . . . For those of us that miss Kurt Vonnegut, it makes this collection a gift. Pick up this book, it’s like having him by your side.”—NUVO