The Great Book of Amber: The Complete Amber Chronicles, 1-10 (Paperback) 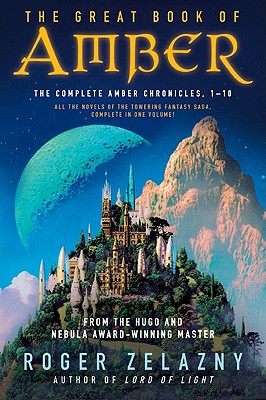 It was a dark and rainy night when I first picked up The Nine Princes of Amber. I was bored, the ceiling was leaking, and my dad handed me this dorky looking book to occupy me. Thus began my love affair with sci-fi. A unique, strangely believable universe in which each world (our own included) is only a shadow of the one true world: Amber. Each character is more memorable than the next and though it’s been years since I read this series I still think of them often. — Amelia Stymacks

“A storyteller without peer. He created worlds as colorful and exotic and memorable as any our genre has ever seen.” —George R.R. Martin

One of the most revered names in sf and fantasy, the incomparable Roger Zelazny was honored with numerous prizes—including six Hugo and three Nebula Awards—over the course of his legendary career. Among his more than fifty books, arguably Zelazny’s most popular literary creations were his extraordinary Amber novels. The Great Book of Amber is a collection of the complete Amber chronicles—featuring volumes one through ten—a treasure trove of the ingenious imagination and phenomenal storytelling that inspired a generation of fantasists, from Neil Gaiman to George R.R. Martin.

The Guns of Avalon

The Hand of Oberon

The Courts of Chaos

Roger Zelazny burst onto the SF scene in the early 1960s with a series of dazzling and groundbreaking short stories. He won his first of six Hugo Awards for Lord of Light, and soon after produced the first book of his enormously popular Amber series, Nine Princes in Amber. In addition to his Hugos, he went on to win three Nebula Awards over the course of a long and distinguished career. He died on June 14, 1995.