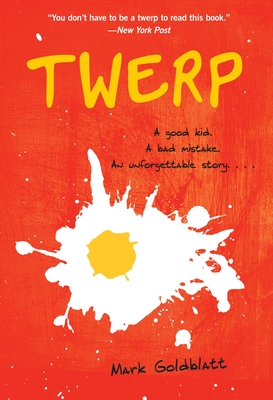 This is book number 1 in the Twerp Series series.

Sixth-grader Julian Twerski has made a terrible mistake--and his English teacher is making him pay for it. For the rest of the school year, he is forced to keep a journal to write about the incident. Although reluctant to write at first, Julian realizes that he can learn a lot about himself, his life, and his friends. An excellent coming-of-age novel about growing up and doing the right thing. — Whitney Kaaz

Julian Twerski isn't a bully. He's just made a big mistake. So when he returns to school after a weeklong suspension, his English teacher offers him a deal: if he keeps a journal and writes about the terrible incident that got him and his friends suspended, he can get out of writing a report on Shakespeare. Julian jumps at the chance. And so begins his account of life in sixth grade--blowing up homemade fireworks, writing a love letter for his best friend (with disastrous results), and worrying whether he's still the fastest kid in school. Lurking in the background, though, is the one story he can't bring himself to tell, the one story his teacher most wants to hear.

Inspired by Mark Goldblatt's own childhood growing up in 1960s Queens, Twerp shines with humor and heart. This remarkably powerful story will have readers laughing and crying right along with these flawed but unforgettable characters.

A Bankstreet Best Book of the Year

“Reminiscent of The Perks of Being a Wallflower. . . . You don’t have to be a twerp to read this book.” —New York Post

“A vivid, absorbing story about one boy’s misadventure, heartache, and hope for himself.” —Rebecca Stead, Newbery Award-winning author of When You Reach Me

“[Fans of] Jeff Kinney’s Diary of a Wimpy Kid who have matured beyond the scope and gravity of that series will find a kindred spirit in Julian.” —School Library Journal

“Reminiscent of movies like The Sandlot. . . . Well-written and funny.” —The Advocate

“Elegant in its simplicity and accessibility.” —The Bulletin of the Center for Children’s Books

“An empathetic and authentic glimpse into the mind of a sixth-grade boy.” —The Florida Times-Union

“Funny, poignant, and an effective commentary on bullying and its consequences.” —The Horn Book Magazine

MARK GOLDBLATT is a lot like Julian Twerski, only not as interesting. He’s a widely published columnist, a novelist, and a professor at the Fashion Institute of Technology. Twerp is his first book for younger readers. He lives in New York City. Visit him online at markgoldblattkids.com.