The Fabric of the Cosmos: Space, Time, and the Texture of Reality (Paperback) 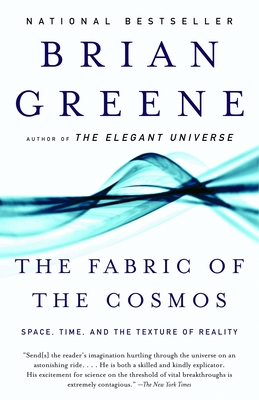 From Brian Greene, one of the world’s leading physicists and author of the Pulitzer Prize finalist The Elegant Universe, comes a grand tour of the universe that makes us look at reality in a completely different way.

Space and time form the very fabric of the cosmos. Yet they remain among the most mysterious of concepts. Is space an entity? Why does time have a direction? Could the universe exist without space and time? Can we travel to the past? Greene has set himself a daunting task: to explain non-intuitive, mathematical concepts like String Theory, the Heisenberg Uncertainty Principle, and Inflationary Cosmology with analogies drawn from common experience. From Newton’s unchanging realm in which space and time are absolute, to Einstein’s fluid conception of spacetime, to quantum mechanics’ entangled arena where vastly distant objects can instantaneously coordinate their behavior, Greene takes us all, regardless of our scientific backgrounds, on an irresistible and revelatory journey to the new layers of reality that modern physics has discovered lying just beneath the surface of our everyday world.

Brian Greene received his undergraduate degree from Harvard University and his doctorate from Oxford University, where he was a Rhodes Scholar. He joined the physics faculty at Cornell University in 1990, was appointed to a full professorship in 1995, and in 1996 joined Columbia University where he is professor of physics and mathematics. He has lectured at both a general and a technical level in more than twenty-five countries and is widely regarded for a number of ground breaking discoveries in superstring theory. He lives in Andes, New York, and New York City.

“Send[s] the reader’s imagination hurtling through space on an astonishing ride. . . . He is both a skilled and kindly explicator. His excitement for science on the threshold of vital breakthroughs is extremely contagious.” —The New York Times

“The best exposition and explanation of early 21st-century research into the fundamental nature of the universe as you are likely to find anywhere.” —Science

“Perhaps the single best explainer of abstruse science in the world today. . . . Greene has a gift for finding the right metaphor.” —The Washington Post

“I recommend Greene’s book to any nonexpert reader who wants an up-to-date account of theoretical physics, written in colloquial language that anyone can understand.” —Freeman Dyson, The New York Review of Books

“As pure intellectual adventure, this is about as good as it gets. . . . Even compared with A Brief History of Time, Greene’s book stands out for its sweeping ambition . . . stripping down the mystery from difficult concepts without watering down the science.” —Newsday

"Greene is as elegant as ever, cutting through the fog of complexity with insight and clarity. Space and time, you might even say, become putty in his hands." —Los Angeles Times

“Highly informed, lucid and witty. . . . There is simply no better introduction to the strange wonders of general relativity and quantum mechanics, the fields of knowledge essential for any real understanding of space and time.” —Discover

“The author’s informed curiosity is inspiring and his enthusiasm infectious.” —Kansas City Star

“Mind-bending. . . . [Greene] is both a gifted theoretical physicist and a graceful popularizer [with] virtuoso explanatory skills.” —The Oregonian

“Brian Greene is the new Hawking, only better.” —The Times (London)

“Greene is an excellent teacher, humorous and quick. . . . Read [your friends] the passages of this book that boggle your mind. (You may find yourself reading them every single paragraph.).” —Boston Globe

“Inexhaustibly witty . . . a must-read for the huge constituency of lay readers enticed by the mysteries of cosmology.” —Sunday Times

“Relish this exhilarating foray into the alien terrain that is our own universe.” —Booklist, starred review

“Holds out the promise that we may one day explain how space and time have come to exist.” —Paul Davies, Nature

“Greene takes us to the limits of space and time.” —The Guardian

“Exciting stuff. . . . Introduces the reader to the mind-boggling landscape of cutting-edge theoretical physics, where mathematics rules supreme.” —The News & Observer

“One of the most entertaining and thought-provoking popular science books to have emerged in the last few years. The Elegant Universe was a Pulitzer Prize finalist. The Fabric of the Cosmos deserves to win it.” —Physics World

“In the space of 500 readable pages, Greene has brought us to the brink of twenty-first-century physics with the minimum of fuss.” —The Herald

“If anyone can popularize tough science, it’s Greene.” —Entertainment Weekly

“Greene is a marvelously talented exponent of physics. . . . A pleasure to read.” —Economist

Fabric of the Cosmos: Space, Time, and the Texture of Reality
$8.00
Very Good