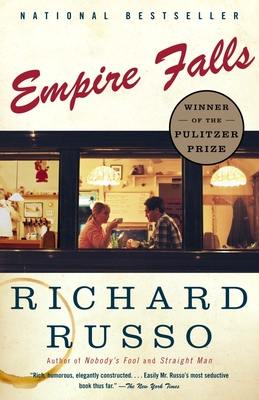 Set in a small town of the same name in central Maine, it is vintage Russo, filled with unique and utterly believable characters living unique and utterly believable lives. Their individual stories, which Russo deftly weaves into the bigger story of a hobbled industrial town, will captivate readers. Russo is simply a master at developing characters. You will not want to depart from these people. Empire Falls is a lengthy and flat-out astonishing novel that you will sink your teeth into and refuse to let go until you turn the last page. — Stan Hynds

If you’ve ever lived in a small town, you’ve already met all of Empire Falls’ characters in person. Russo writes them with a richness of familiarity, and their various perspectives are immediately compelling—from the humorous to the tragic. I took my time with this one; once I began walking down its cracked sidewalks, frequenting its lone diner, bouncing between the crusts of its two-tiered society, I didn’t want to leave.

NATIONAL BESTSELLER • PULITZER PRIZE WINNER • The bestselling author of Nobody's Fool and Straight Man delves deep into the blue-collar heart of America in a work that overflows with hilarity, heartache, and grace.

Welcome to Empire Falls, a blue-collar town full of abandoned mills whose citizens surround themselves with the comforts and feuds provided by lifelong friends and neighbors and who find humor and hope in the most unlikely places, in this Pulitzer Prize-winning novel by Richard Russo.

Miles Roby has been slinging burgers at the Empire Grill for 20 years, a job that cost him his college education and much of his self-respect. What keeps him there? It could be his bright, sensitive daughter Tick, who needs all his help surviving the local high school. Or maybe it’s Janine, Miles’ soon-to-be ex-wife, who’s taken up with a noxiously vain health-club proprietor. Or perhaps it’s the imperious Francine Whiting, who owns everything in town–and seems to believe that “everything” includes Miles himself.

Richard Russo is the author of eight novels; two collections of stories; and Elsewhere, a memoir. In 2002 he received the Pulitzer Prize for Empire Falls, which like Nobody’s Fool was adapted to film, in a multiple-award-winning HBO miniseries.

“Russo writes with a warm, vibrant humanity.... A stirring mix of poignancy, drama and comedy.” –The Washington Post

“Russo is one of the best novelists around.” –The New York Times Book Review

“The history of American literature may show that Richard Russo wrote the last great novel of the 20th century.” –Christian Science Monitor

“Nobody does small-town life better than Richard Russo.” –Atlanta Journal-Constitution