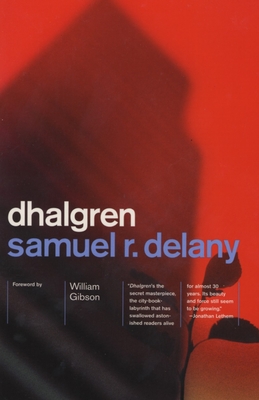 If more Sci-Fi novels were like this one, I'd read them more often. Dhalgren is a sun slowly burning into madness, beauty, and love. For those who prefer James Joyce to Michael Crichton, you might find your pathway into the genre through this book.

In one of the most profound and bestselling science fiction novels of all time, Samuel R. Delany has produced a novel "to stand with the best American fiction of the 1970s" (Jonathan Lethem, bestselling author of Fortress of Solitude).

Bellona is a city at the dead center of the United States. Something has happened there.... The population has fled. Madmen and criminals wander the streets. Strange portents appear in the cloud-covered sky. Into this disaster zone comes a young man—poet, lover, and adventurer—known only as the Kid.

Tackling questions of race, gender, and sexuality, Dhalgren is a literary marvel and groundbreaking work of American magical realism.

After his seventh novel, Empire Star (1966), Samuel R. Delany began publishing short fiction professionally with “The Star Pit.” It appeared in Worlds of Tomorrow and was turned into a popular two-hour radio play, broadcast annually over WBAI-FM for more than a decade. Two tales, “Aye, and Gomorrah” and “Time Considered as a Helix of Semi-Precious Stones,” won Nebula Awards as the best science fiction short stories, respectively, of 1967 and 1969. Aye, and Gomorrah: And Other Stories contains all the significant short science fiction and fantasy works that Delany published between 1965 and 1988, excepting only those tales in his Return to Nevèrÿon series. A native New Yorker, Delany teaches English and creative writing at Temple University in Philadelphia. In July of 2002, he was inducted into the Science Fiction Hall of Fame.


"A Joycean tour de force of a novel, Dhalgren…stake[s] a better claim than anything published in the country in the last quarter-century (excepting only Gass’s Omensetter’s Luck and Nabokov’s Pale Fire) to a permanent place as one of the enduring monuments of our national literature."–The Libertarian Review