A Lesson Before Dying: A Novel (Vintage Contemporaries) (Paperback) 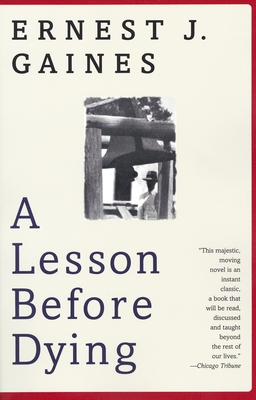 By Ernest J. Gaines
$14.00
Click Title for IN STOCK Location

Set in the cajun Deep South of the 1940's, Gaines's National Book Critics Circle award-winning novel is a poignant yet unsentimental treatment of dignity in the face of grave injustice. A slow-witted young black man is wrongly convicted of murder and the local black schoolteacher is convinced to spend time with him in the days leading up to his execution. His task is to "teach" him to meet his fate as a free-thinking man and not the animal he was portrayed as in the trial. What starts out as a futile and begrudgingly met obligation slowly transforms into an unusual bond between the two men. A lesson is indeed taught and learned. The reader, too, takes away a difficult and extraordinary lesson about humanity from this classic piece of American literature. — Stan Hynds

“This majestic, moving novel is an instant classic, a book that will be read, discussed and taught beyond the rest of our lives.”—Chicago Tribune

Winner of the National Book Critics Circle Award, A Lesson Before Dying is a deep and compassionate novel about a young man who returns to 1940s Cajun country to visit a black youth on death row for a crime he didn't commit. Together they come to understand the heroism of resisting.

From the critically acclaimed author of A Gathering of Old Men and The Autobiography of Miss Jane Pittman.

Ernest Gaines was born on a plantation in Pointe Coupée Parish near New Roads, Louisiana, which is the Bayonne of all his fictional works. He is writer-in-residence emeritus at the University of Louisiana at Lafayette. In 1993 Gaines received the John D. and Catherine T. MacArthur Foundation Fellowship for his lifetime achievements. In 1996 he was named a Chevalier de l’Ordre des Arts et des Lettres, one of France’s highest decorations. He and his wife, Dianne, live in Oscar, Louisiana.

"This majestic, moving novel is an instant classic, a book that will be read, discussed and taught beyond the rest of our lives." —Chicago Tribune

"Enormously moving. . . . Gaines unerringly evokes the place and time about which he writes." —Los Angeles Times

“A quietly moving novel [that] takes us back to a place we've been before to impart a lesson for living.” —San Francisco Chronicle