The Ransomware Hunting Team: A Band of Misfits' Improbable Crusade to Save the World from Cybercrime (Hardcover) 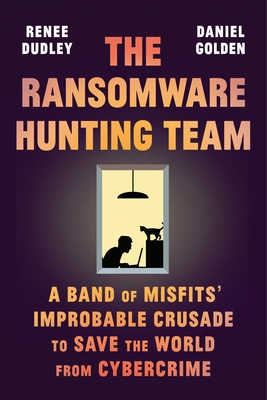 A real-life technological thriller about a band of eccentric misfits taking on the biggest cybersecurity threats of our time.

“What Michael Lewis did for baseball in Moneyball, Renee Dudley and Daniel Golden do brilliantly for the world of ransomware and hackers. Cinematic, big in scope, and meticulously reported, this book is impossible to put down.” —Doug Stanton, New York Times bestselling author of In Harm’s Way and Horse Soldiers

Scattered across the world, an elite team of code crackers is working tirelessly to thwart the defining cyber scourge of our time. You’ve probably never heard of them. But if you work for a school, a business, a hospital, or a municipal government, or simply cherish your digital data, you may be painfully familiar with the team’s sworn enemy: ransomware. Again and again, an unlikely band of misfits, mostly self-taught and often struggling to make ends meet, have outwitted the underworld of hackers who lock computer networks and demand huge payments in return for the keys.

The Ransomware Hunting Team traces the adventures of these unassuming heroes and how they have used their skills to save millions of ransomware victims from paying billions of dollars to criminals. Working tirelessly from bedrooms and back offices, and refusing payment, they’ve rescued those whom the often hapless FBI has been unwilling or unable to help. Foremost among them is Michael Gillespie, a cancer survivor and cat lover who got his start cracking ransomware while working at a Nerds on Call store in the town of Normal, Illinois. Other teammates include the brilliant, reclusive Fabian Wosar, a high school dropout from Germany who enjoys bantering with the attackers he foils, and his protégé, the British computer science prodigy Sarah White. Together, they have established themselves as the most effective force against an escalating global threat. This book follows them as they put their health, personal relationships, and financial security on the line to navigate the technological and moral challenges of combating digital hostage taking.

Urgent, uplifting, and entertaining, Renee Dudley and Daniel Golden’s The Ransomware Hunting Team is a real-life technological thriller that illuminates a dangerous new era of cybercrime.

Renee Dudley is a technology reporter at ProPublica. Previously, as an investigative reporter at Reuters, she was named a 2017 Pulitzer Prize finalist for her work uncovering systematic cheating on college admissions tests. She started her career at daily newspapers in South Carolina and New England, and has won numerous journalism honors, including the Eugene S. Pulliam First Amendment Award.

Daniel Golden, a senior editor and reporter at ProPublica, has won a Pulitzer Prize and three George Polk Awards. He is the bestselling author of The Price of Admission: How America’s Ruling Class Buys Its Way into Elite Colleges—and Who Gets Left Outside the Gates and Spy Schools: How the CIA, FBI, and Foreign Intelligence Secretly Exploit America’s Universities.

"Dudley and Golden do a brilliant job of tracing the back-and-forth between attackers and defenders . . . [They] are highly attuned to the havoc ransomware can wreak . . . Dudley and Golden are most interested in the characters at the center of this fight . . . The book offers lively portraits of these people . . . as it traces the evolution of ransomware into a more professionalized business for organized cartels." —Josephine Wolff, The New York Times Book Review

"[Dudley and Golden] focus as much on people as on the computers . . . Fascinating . . . The ransomware business is complicated, ruthless, and growing fast. Those looking for a guide should start here." —The Economist

"Journalists Dudley and Golden explore with verve and fascinating detail the assorted group of unpaid, self-taught experts in the U.S. and Europe who make it their duty to protect the innocent from ransomware . . . [They create] vivid portraits of several brilliant, occasionally socially awkward members of the loosely organized team . . . Anyone with internet access should find this intriguing, and a little horrifying." —Booklist

"Intriguing . . . Dudley and Golden render their subjects—some of whom endured poverty and bullying in their teens—with warmth and admiration while acknowledging that competition between hacker gangs and ransomware hunters has helped spur more sophisticated viruses and bigger paydays. Readers will put down this engrossing underdog story just long enough to back up their own files." —Publishers Weekly

"[Dudley and Golden] weave a vast and intricate story about a global crime and the ragtag band of volunteers who have assembled to step in where law enforcement was unable or unwilling. Profiles of the ransomware hunters . . . push this book along at a swift pace, adding an interesting human element to a problem that can often seem impenetrable to outsiders. For anyone interested in the modern reality of global cyber-crime, this is a must-read." —CrimeReads

"Dudley and Golden are both respected journalists, and their writing reflects their acclaimed careers. With the pacing of an action-packed thriller, The Ransomware Hunting Team is loaded with page-turning moments . . . [This] is a book that should not be overlooked by anyone who wishes to better understand the complex cyberworld we inhabit." —Micah Cummins, Open Letters Review

"What Michael Lewis did for baseball in Moneyball, Dudley and Golden do brilliantly for the world of ransomware and hackers. Cinematic, big in scope, and meticulously reported, this book is impossible to put down. Welcome to a brand-new world of geniuses, crooks, capers and global intrigue that you’re already part of, and likely didn’t even know it." —Doug Stanton, New York Times bestselling author of In Harm’s Way and Horse Soldiers

“If you’ve ever used a computer, you need this book. Renee Dudley and Daniel Golden have burrowed into the digital underworld to reveal the unlikely heroes saving the rest of us from cyber chaos. The Ransomware Hunting Team is nonfiction with the narrative engine of a thriller.” —Mitchell Zuckoff, New York Times bestselling author of Fall and Rise and 13 Hours

"A deeply reported dive into the rising tide of digital exploitation gangs, their nefarious methods, and the scraggly band of volunteers who are fighting to keep us safe. Totally engrossing." —Julia Angwin, author of Dragnet Nation

"Meet the whitehats who unravel the baffling malware infesting our connected computers. Unsung and unpaid, these clever computer jocks rescue individuals, businesses, and governments." —Clifford Stoll, author of The Cuckoo's Egg and other books

"The Ransomware Hunting Team is a tour de force of investigative reporting, with more twists, turns and shadowy figures than any spy thriller. Renee Dudley and Daniel Golden take you deep inside the hidden universe of ransomware hackers and heroes—and some who may or may not be both. It’s a breathtaking true tale that’s astonishing and disturbing—and irresistibly readable." —Joanne Lipman, bestselling author of That's What She Said and former editor in chief of USA Today

"Dudley and Golden take us behind the firewall and into the fire—Ransomware—that's about to engulf everyone who owns a computer. They put flesh and bones on the 1s and 0s by decrypting the human stories of the cyber attackers, their victims, and, most of all, the civilian sleuths around the world who've become unexpected superheroes of the cyber realm. Whether you're a layman or a lawman, this is a must read." —Frank Figliuzzi, former assistant director for counterintelligence at the FBI and author of The FBI Way