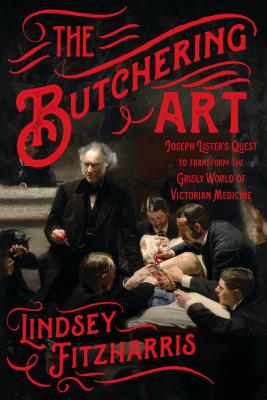 In The Butchering Art, the historian Lindsey Fitzharris reveals the shocking world of nineteenth-century surgery and shows how it was transformed by advances made in germ theory and antiseptics between 1860 and 1875. She conjures up early operating theaters—no place for the squeamish—and surgeons, who, working before anesthesia, were lauded for their speed and brute strength. These pioneers knew that the aftermath of surgery was often more dangerous than patients’ afflictions, and they were baffled by the persistent infections that kept mortality rates stubbornly high. At a time when surgery couldn’t have been more hazardous, an unlikely figure stepped forward: a young, melancholy Quaker surgeon named Joseph Lister, who would solve the riddle and change the course of history.

Fitzharris dramatically reconstructs Lister’s career path to his audacious claim that germs were the source of all infection and could be countered by a sterilizing agent applied to wounds. She introduces us to Lister’s contemporaries—some of them brilliant, some outright criminal—and leads us through the grimy schools and squalid hospitals where they learned their art, the dead houses where they studied, and the cemeteries they ransacked for cadavers.

Eerie and illuminating, The Butchering Art celebrates the triumph of a visionary surgeon whose quest to unite science and medicine delivered us into the modern world.

Lindsey Fitzharris is the bestselling author of The Butchering Art and The Facemaker. Dr. Fitzharris, who holds a Ph.D. in the History of Science and Medicine from Oxford University, regularly writes for the Wall Street Journal, Scientific American, the Guardian, the Lancet, and other major publications. She is also the writer and host of the Smithsonian Channel TV series The Curious Life and Death of….
drlindseyfitzharris.com

One of Medscapes' “Books that doctors would love to give (or receive!)”

“Atmospheric . . . The story it tells is one of abiding fascination.” —Jennifer Senior, The New York Times

"Readers interested in the medical field can’t go wrong with this one." —Bookish

A Publishers Weekly Book of the Week

Book of the Day, The Guardian

“Fast-paced, thoroughly researched . . . Fitzharris documents her hero’s long struggle against naysayers and rivals, as well as the setbacks he faced in his personal and professional life, in an engaging journey into the past. This is popular history at its best.” —Dean Jobb, The Scotsman

“The Butchering Art is an absorbing medical and social history that will leave you feeling both enlightened and thankful to benefit from the advances Lister (and his wife) popularized.” —Sarah Harrison Smith, Omnivoracious

“A fascinating account of how hospitals became places of healing rather than death.” —The Daily Mail

"The Butchering Art is a formidable achievement —a rousing tale told with brio, featuring a real-life hero worthy of the ages and jolts of Victorian horror to rival the most lurid moments of Wilkie Collins." —John J. Ross, The Wall Street Journal

“[Fitzharris] paints a compelling portrait of a man of conviction, humor and, above all, humanity. . . The Butchering Art is thoroughly enjoyable." —The Guardian

"In The Butchering Art, Lindsey Fitzharris becomes our Dante, leading us through the macabre hell of nineteenth-century surgery to tell the story of Joseph Lister, the man who solved one of medicine's most daunting and lethal puzzles. With gusto, Dr. Fitzharris takes us into the operating theaters of yore as Lister awakens to the true nature of the killer that turned so many surgeries into little more than slow-moving executions. Warning: She spares no detail!" —Erik Larson, bestselling author of Dead Wake and The Devil in the White City

"With an eye for historical detail and an ear for vivid prose, Lindsey Fitzharris tells a spectacular story about one of the most important moments in the history of medicine: the rise of sterile surgery. The Butchering Art is a spectacular book—deliciously gruesome and utterly gripping. You will race through it, wincing as you go, but never wanting to stop." —Ed Yong, bestselling author of I Contain Multitudes

"The Butchering Art is medical history at its most visceral and vivid. It will make you forever grateful to Joseph Lister, the man who saved us from the horrors of pre-antiseptic surgery, and to Lindsey Fitzharris, who brings to life the harrowing and deadly sights, smells, and sounds of a nineteenth-century hospital." —Caitlin Doughty, bestselling author of Smoke Gets in Your Eyes and From Here to Eternity

"The Butchering Art is a brilliant and gripping account of the almost unimaginable horrors of surgery and postoperative infection before Joseph Lister transformed it all with his invention of antisepsis. It is the story of one of the truly great men of medicine and of the triumph of humane scientific method and dogged persistence over dogmatic ignorance." —Henry Marsh, bestselling author of Do No Harm

"Electric. The drama of Lister's mission to shape modern medicine is as exciting as any novel." —Dan Snow, BBC presenter and author

"Excellent . . . [Fitzharris] infuses her thoughtful and finely crafted examination of this [antiseptic] revolution with the same sense of wonder and compassion Lister himself brought to his patients, colleagues, and students . . . a remarkable life and time." —Publishers Weekly (starred review)

"Fitzharris knows how to engage readers in fascinating and shocking details about medical history . . . In deftly capturing an 'epochal moment when medicine and science merged,' the author also offers an important reminder that, while many regard science as the key to progress, it can only help in so far as people are willing to open their minds to embrace change." —Kirkus Reviews (starred review)