Now I Know Who My Comrades Are: Voices from the Internet Underground (Paperback) 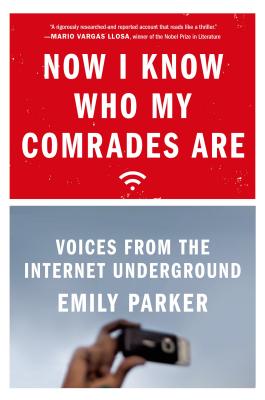 “An essential read.” —The Los Angeles Review of Books

“One can practically overdose on the levels of intrigue at play in this account of "netizens," bloggers turned social crusaders turned Internet rock stars.” —Boston Globe

In China, university students use the Internet to save the life of an attempted murder victim. In Cuba, authorities unsuccessfully try to silence an online critic by sowing seeds of distrust in her marriage. And in Russia, a lone blogger rises to become one of the most prominent opposition figures since the fall of the Soviet Union. Authoritarian governments try to isolate individuals from one another, but in the age of social media freedom of speech is impossible to contain. Online, people discover that they are not alone. As one blogger put it, "Now I know who my comrades are."

In her groundbreaking book, Now I Know Who My Comrades Are: Voices from the Internet Underground, Emily Parker, formerly a State Department policy advisor, writer at The Wall Street Journal and editor at The New York Times, provides on-the-ground accounts of how the Internet is transforming lives in China, Cuba, and Russia. It's a new phenomenon, but one that's already brought about significant political change. In 2011 ordinary Egyptians, many armed with little more than mobile phones, helped topple a thirty-year-old dictatorship. It was an extraordinary moment in modern history—and Now I Know Who My Comrades Are takes us beyond the Middle East to the next major civil rights battles between the Internet and state control. For example, Parker charts the rise of Russia's Alexey Navalny from ordinary blogger to one of the greatest threats to Vladimir Putin's regime. This book introduces us to an army of bloggers and tweeters—generals and foot soldiers alike. Even as they navigate the risks of authoritarian life, they feel free. Now I Know Who My Comrades Are is their story.

“Parker . . . argues that online communication can undermine authoritarian rule even when its effects don't make their way to the streets.” —The New Yorker

Emily Parker is the digital diplomacy advisor and a senior fellow at the New America Foundation. Previously, she was a member of Secretary Clinton’s Policy Planning staff at the State Department, where she covered twenty-first-century statecraft, innovation, and technology. Before joining the State Department, she was an op-ed editor at The New York Times and an editorial writer and op-ed editor at The Wall Street Journal. She is the author of Now I Know Who My Comrades Are.

“One can practically overdose on the levels of intrigue at play in this account of "netizens," bloggers turned social crusaders turned Internet rock stars.” —Boston Globe

“It is [Parker's] tracing of the more subtle, psychological effects the internet has had on activists, regular folks, and authorities that makes this book an essential read...if one is restricted to a few voices, oh what voices Parker has chosen.” —The Los Angeles Review of Books

“One of the merits of Parker's work is to have captured these characters not just glued to their keyboards...but also in their intimate reality, in the cafes or pubs where they seek refuge, in their families, in the political rallies they support or in the hiding places they seek out when persecuted. That fills this book with color and life...Some of the personalities in Parker's book stick to memory with the same vivacity and dynamism of a Joseph Conrad or Andre Malraux character.” —The New Republic

“Now I Know Who My Comrades Are" is a valuable reminder of social networks beyond Facebook and Twitter...The book also succeeds in introducing readers to the wilds of Chinese, Spanish and Russian webs unexplored by English-speakers” —The Economist

“Parker's work is a shining example for women writers around the world; this book is a clear showing of her prowess as both writer and researcher.” —The California Journal of Women Writers

“Parker...argues that online communication can undermine authoritarian rule even when its effects don't make their way to the streets.” —The New Yorker

“Emily Parker's book Now I Know Who My Comrades Are: Voices from the Internet Underground is a rigorously researched and reported account that reads like a thriller...It's been a while since I have read a book that is so entertaining, not to mention one so encouraging for the culture of liberty.” —Mario Vargas Llosa, Nobel Prize–winning author of The War of the End of the World and The Time of the Hero

“Now I Know Who My Comrades Are is a timely and necessary book. Story by story, Emily Parker shows how the Internet has changed lives and social realities in three oppressive countries. The clarity, honesty, and intelligence of her writing make this book both admirable and enjoyable.” —Ha Jin, National Book Award–winning author of Waiting and War Trash

“Emily Parker tells us enthralling and beautifully detailed stories about bloggers and Internet activists in China, Russia, and Cuba, showing us the power of human connection even as she describes and analyzes it. The combination of her humanism and keen insight illuminates dimensions of the Internet that we so often miss, the ways it can create the personal ties and trust that are the foundation of collective action. A great read for both the nightstand and the scholar's shelf.” —Anne-Marie Slaughter, president and CEO of the New America Foundation, and Former Director of policy planning for the U.S. State Department

“The heroes of this terrific book are ‘Internet foot soldiers,' not the usual foreign ministers and businessmen, and those soldiers are changing Russia, China, and Cuba...and the world. Emily Parker is among a handful of the most promising new foreign policy commentators who weave together technology, culture, society, and politics with hard facts and clear analysis.” —Leslie H. Gelb, president emeritus of the Council on Foreign Relations

“This book is a must read for anyone interested in how the Internet and social media serve as instruments of change in societies where information has been tightly controlled by authoritarian regimes. Through a wealth of personal anecdotes enriched by judicious commentary, Emily Parker deftly shows both the possibilities and limitations of the Internet's ability to promote greater political openness.” —J. Stapleton Roy, former U.S. ambassador to China, Singapore and Indonesia

“This book is about twenty times better reported or written than any book ever written about the Internet, period.” —Tim Wu, author of The Master Switch: The Rise and Fall of Information Empires

“In this fascinating book, Emily Parker shows that the Internet affects politics by affecting the psychology of its users. Now I Know Who My Comrades Are demonstrates how much it can matter for citizens to have a voice, and to discover that they are not alone.” —Clay Shirky, author of Here Comes Everybody: The Power of Organizing Without Organizations

“Parker's book is clearly written, well researched, and contextualized. Her long-lasting relationships--she meets Chinese dissident Michael Anti for the first time in 2004, for example--allow her to create a narrative history of these bloggers' personal evolution as potential reformers, of Internet activism as a whole as seen through their experiences, and of government responses to it.” —The Brooklyn Rail