Bomber County: The Poetry of a Lost Pilot's War (Paperback) 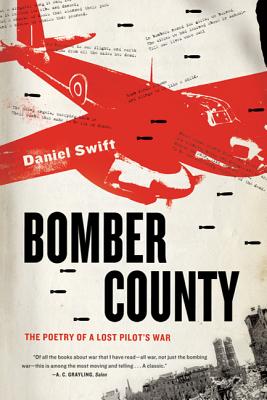 Daniel Swift's grandfather was shot down over the English Channel during World War II. To understand the pilot's experience during the war, Swift turns to the poetry of Eliot, Auden, Jarrell and others. The resulting biography/memoir is a fascinating look at the mentality of warriors and the destructive cost of combat. Beautiful and profound. — Charles Bottomley

In early June 1943, James Eric Swift, a pilot with the 83rd Squadron of the Royal Air Force, boarded his Lancaster bomber for a night raid on Münster and disappeared.

Widespread aerial bombardment was to the Second World War what the trenches were to the First: a shocking and new form of warfare, wretched and unexpected, and carried out at a terrible scale of loss. Just as the trenches produced the most remarkable poetry of the First World War, so too did the bombing campaigns foster a haunting set of poems during the Second.

In researching the life of his grandfather, Daniel Swift became engrossed with the connections between air war and poetry. Ostensibly a narrative of the author's search for his lost grandfather through military and civilian archives and in interviews conducted in the Netherlands, Germany, and England, Bomber County is also an examination of the relationship between the bombing campaigns of World War II and poetry, an investigation into the experience of bombing and being bombed, and a powerful reckoning with the morals and literature of a vanished moment.

Daniel Swift teaches at the New College of the Humanities in London. His first book, Bomber County, was longlisted for the Samuel Johnson Prize and the Guardian First Book award, and his essays and reviews have appeared in the New York Times, the New Statesman, and Harper’s.

"With its inherent tension and quiet moments of deliberation, the subject of bombing is well-suited to the literary memoir, and Swift renders a potentially narrow slice of history with warmth and sophistication. " - Publishers Weekly