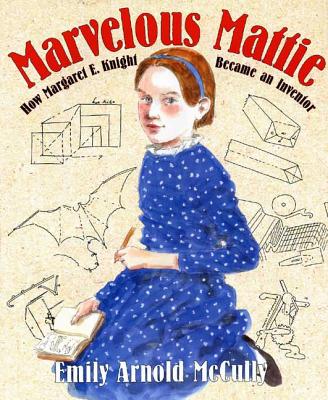 With her sketchbook labeled My Inventions and her father's toolbox, Mattie could make almost anything – toys, sleds, and a foot warmer. When she was just twelve years old, Mattie designed a metal guard to prevent shuttles from shooting off textile looms and injuring workers. As an adult, Mattie invented the machine that makes the square-bottom paper bags we still use today. However, in court, a man claimed the invention was his, stating that she "could not possibly understand the mechanical complexities." Marvelous Mattie proved him wrong, and over the course of her life earned the title of "the Lady Edison."

With charming pen-and-ink and watercolor illustrations, this introduction to one of the most prolific female inventors will leave readers inspired.

Marvelous Mattie is a 2007 Bank Street - Best Children's Book of the Year.

I was born in Galesburg, Illinois, in 1939, but grew up in Garden City, New York. My father was a writer/producer of network radio shows, and my mother had been an actress and singer. Noticing that I was trying to draw people and objects, my mother once said to me, "Why don't you practice that and get it right?" She saw a talent to be developed so that I could support myself when I grew up.

As a child, I doodled and sketched and created my own stories, binding them into books. As class artist in school, I designed posters, backdrops, and programs for concerts and plays. I often visited the Museum of Modern Art in New York City and sketched people sitting on benches in Union Square. The city fueled my ambitions for an active life in the arts, theater, and publishing.

I attended Pembroke College (now part of Brown University), majoring in art history and acting in plays. I also collaborated on an award-winning musical. For years, people stood around me as I drew, marveling that I could reproduce someone or something. If art was a performance, I wanted to try out other roles.

After graduation, I worked as a mat cutter in an advertising agency and earned an M.A. in art history at Columbia University. Realizing I had no future in the advertising agency, I put together a portfolio of drawings and took it around to art directors. Gradually, jobs trickled in, mostly for book covers. Finally, an editor at Harper & Row Junior Books spotted a poster I had done that featured children. I received my first book illustration assignment, which led to another, and so on.

Meanwhile, I wrote fiction and published a short story that was selected for the O. Henry Collection. It was followed by two novels. I was able to try acting again when the chance arose to audition for a friend's play. It opened in Albany and moved to Off Broadway in New York. It was a wonderful experience, but I knew I had to go back to books. I have now written or illustrated more than two hundred books for children.

My advice for aspiring artists and writers is this: You can't aim to please other people. Do what matters most to you, then hope readers respond.

I believe that books, rather than be palliative or merely instructive, should stir the imagination. I share Isaac Bashevis Singer's belief that children's books are the last refuge of storytelling.

Emily Arnold McCully divides her time between New York City and upstate New York. She has won many awards for her children's books, including the Caldecott Medal for Mirette on the High Wire.

“Told in a style that is not only easy to understand, but that is also a good read-aloud. . . .will inspire interest in women and children as inventors.” —School Library Journal

“Not only is Mattie Knight's life marvelously inventive, but her story is as well.” —Starred, The Horn Book

“McCully draws children into Knight's life by emphasizing. . . her resolute stance against the restrictive gender roles of her time. Watercolor scenes invoke the drama.” —Booklist

“Successfully conveys the drama of Knight's life and her focused intensity.” —Bulletin of the Center for Children's Books

“Invites kids to think about the history of women and scientific innovation.” —Washington Post Book World

“Girls are sure to love 'Marvelous Mattie' for its real-life spunky heroine . . . But boys and girls alike will love it for its celebration of curiosity and persistence--and the joy that comes from following your heart.” —The Christian Science Monitor