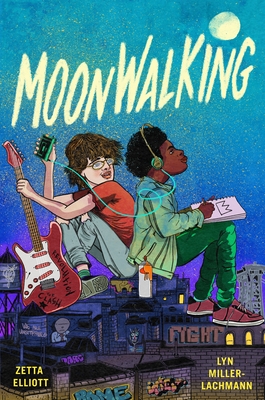 "This novel in verse, alternately narrated by two boys in 1980s Greenpoint, Brooklyn, one channeled by Elliott and one by Miller-Lachmann, eloquently tackles race, culture and life on the spectrum." — The New York Times

For fans of Jason Reynolds and Jacqueline Woodson, this middle-grade novel-in-verse follows two boys in 1980s Brooklyn as they become friends for a season.

Punk rock-loving JJ Pankowski can't seem to fit in at his new school in Greenpoint, Brooklyn, as one of the only white kids. Pie Velez, a math and history geek by day and graffiti artist by night is eager to follow in his idol, Jean-Michel Basquiat's, footsteps. The boys stumble into an unlikely friendship, swapping notes on their love of music and art, which sees them through a difficult semester at school and at home. But a run-in with the cops threatens to unravel it all.

From authors Zetta Elliott and Lyn Miller-Lachmann, Moonwalking is a stunning exploration of class, cross-racial friendships, and two boys' search for belonging in a city as tumultuous and beautiful as their hearts.

Zetta Elliott is a black feminist writer of poetry, plays, essays, novels, and stories for children. Her poetry has been published in We Rise, We Resist, We Raise our Voices, and her picture book, Bird, won the Honor Award in Lee & Low Books' New Voices Contest and the Paterson Prize for Books for Young Readers. She lives in West Philadelphia.

Lyn Miller-Lachmann is an author, teacher, and librarian. Her books for teens and young readers include Gringolandia, Surviving Santiago. Rogue, and She Persisted: Temple Grandin. As an adult, she was diagnosed with Asperger's syndrome and delves into her diagnosis often in her writing. She and her husband divide their time between New York City and Lisbon, Portugal.

"This novel in verse, alternately narrated by two boys in 1980s Greenpoint, Brooklyn, one channeled by Elliott and one by Miller-Lachmann, eloquently tackles race, culture and life on the spectrum." — The New York Times

"The coauthors’ equally strong contributions evocatively bring the characters and setting to life through visual poetry. The even pacing makes for an engrossing read, and the characters’ pain and promise will remain with readers. A stellar, hauntingly beautiful narrative." — Kirkus Reviews, starred review

"In an authentic look at the racial divide that continues today, authors Elliott and Miller-Lachman bring varying degrees of own-voices authenticity to the characterizations and emotions represented. Their multilayered exposure of a specific time in history will resonate with modern readers, who will see these racist acts echoed all too loudly in current events." — Booklist, starred review

Through alternating first-person accounts, and with varied poetic styles, Elliott (A Place Inside of Me, rev. 11/20) and Miller-Lachmann (Rogue, rev. 9/13) present a thoughtfully structured and sensitively rendered verse novel set in early- 1980s Brooklyn featuring two memorable protagonists... Both authors are adept at evocatively re-creating the setting, with references ranging from Ronald Reagan’s anti-union stance to Jean- Michel Basquiat, Michael Jackson, and the Clash. Authors’ notes give background on various aspects of the novel, including autism as a likely diagnosis for JJ, using today’s terms. — Horn Book, starred review

"While JJ and Pie’s childhoods unfold 40 years in the past, their experience will ring true to modern readers, with explorations of immigration, racism, mental illness, and love – all topics that still resonate powerfully today. Racism is as real, divisions are as stark, no matter how freshly walked the protests or raw the throats that call for justice." — Quill & Quire

"In the captivating middle-grade novel Moonwalking, two boys in 1980s Brooklyn form an unlikely friendship through music and art... Elliott and Miller-Lachmann use dual points of view to bring this heartwarming but also painful novel-in-verse to life... They delicately cover topics that include interracial friendships, abuse, mental health, immigration, disabilities, class and the sense of belonging in language that is easily accessible to middle-grade readers." — Shelf Awareness