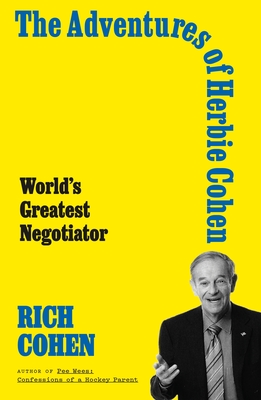 The Adventures of Herbie Cohen follows our hero from his youth spent running around Brooklyn with his pals Sandy Koufax, Larry King, Who Ha, Inky, and Ben the Worrier (many of them members of his Bensonhurst gang, “the Warriors”); to his days coaching basketball in the army in Europe; to his years as a devoted and unconventional husband, father, and freelance guru crossing the country to give lectures, settle disputes, and hone the art of success while finding meaning in this strange, funny world.

This book is an ode to a remarkable man by an adoring but not undiscerning son, and a treasure trove of hilarious antics and counterintuitive wisdom. (Some of this stuff you can use at home.) It’s a bildungsroman, a collection of tall tales, the unfolding of a unique biography coiled around Herbie’s great insight and guiding principle: The secret of life is to care, but not that much.

Rich Cohen is the New York Times-bestselling author of Tough Jews, Monsters, Sweet and Low, The Sun & the Moon & the Rolling Stones, The Chicago Cubs, and The Last Pirate of New York, and, with Jerry Weintraub, When I Stop Talking, You’ll Know I’m Dead. He is the cocreator of the HBO series Vinyl, a contributing editor at Rolling Stone, and a writer at large for Air Mail. He has written for The New York Times, The New Yorker, The Atlantic, and Harper’s Magazine, among other publications. Cohen has won the Great Lakes Book Award, the Chicago Public Library’s 21st Century Award, and the ASCAP Deems Taylor Award. He lives in Connecticut.

"[A] wildly entertaining story of a man with boundless energy and philosophical pizazz." —Rick Kogan, The Chicago Tribune

"[A] treat of a new book . . . Rich Cohen writes lovingly of his father’s 'love of bull—.' But the accumulated wit and wisdom of Herb Cohen scattered through the book reveals instead a keen grasp of human frailty and a gift for aphorism no less valid for its glibness. . . It’s essentially the saga of a remarkable man who’s fond of saying 'The meaning of life . . . is more life' and knows what he’s talking about." —Edward Kosner, The Wall Street Journal

"Wry and affectionate . . . This is a rich and beguiling homage to a larger-than-life father." —Publishers Weekly

"[Rich] Cohen, who has written about baseball, football, Jewish gangsters, and kids' hockey, offers an affectionate portrait of his remarkable father, as amusing as it is tender . . . A thoroughly entertaining combination of memoir and biography." —Kirkus Reviews