The Girl Who Was Saturday Night: A Novel (Hardcover) 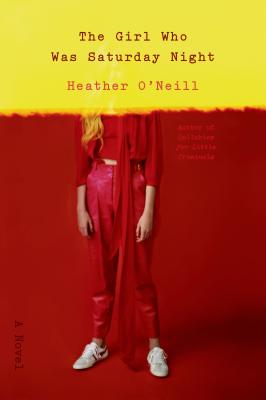 By Heather O'Neill
Call or email to see if a used copy is available.
Out of Print

Set in Montreal, The Girl Who Was Saturday Night, is a funny and tender first-person tale told by Nouschka Tremblay, twin sister of Nicholas, daughter of Etienne, a once famous Quebecois entertainer and quasi-criminal. We first meet Nouschka at nineteen, as a beauty queen in a local celebration. The book is filled with crazy events, delightfully zany characters who all seem to dress outrageously. A wonderful story of what makes family, how they interact and try to figure out their lives. — Sarah Knight

An enchanting story of twins, fame, and heartache by the much-praised author of Lullabies for Little Criminals


Heather O'Neill charmed readers in the hundreds of thousands with her sleeper hit, Lullabies for Little Criminals, which documented with a rare and elusive magic the life of a young dreamer on the streets of Montreal. Now, in The Girl Who Was Saturday Night, she returns to the grubby, enchanted city with a light and profound tale of the vice of fame and the ties of family.

Nineteen years old, free of prospects, and inescapably famous, the twins Nicolas and Nouschka Tremblay are trying to outrun the notoriety of their father, a French-Canadian Serge Gainsbourg with a genius for the absurd and for winding up in prison. "Back in the day, he could come home from a show with a paper bag filled with women's underwear. Outside of Québec nobody had even heard of him, naturally. Québec needed stars badly."

Since the twins were little, Étienne has made them part of his unashamed seduction of the province, parading them on talk shows and then dumping them with their decrepit grandfather while he disappeared into some festive squalor. Now Étienne is washed up and the twins are making their own almost-grown-up messes, with every misstep landing on the front pages of the tabloid Allo Police. Nouschka not only needs to leave her childhood behind; she also has to leave her brother, whose increasingly erratic decisions might take her down with him.

Heather O'Neill is a contributor to This American Life, and her work has appeared in The New York Times Magazine, among other publications. Her novel Lullabies for Little Criminals, an international bestseller, won the Paragraphe Hugh McLennan Prize for Fiction and the Canada Reads competition in 2007; was short-listed for six prizes, including the Orange Prize for Fiction and the Governor General’s Literary Award; and was long-listed for the International IMPAC Dublin Literary Award. She lives in Montreal, Canada.

“A marvelously intriguing novel of a family in dissolution, each member of which is richly and memorably characterized. . . . The book is beautifully written, particularly rich in simile and metaphor . . . Compulsively readable, The Girl Who Was Saturday Night is a delight for any night.” —Michael Cart, Booklist (starred review)

“O'Neill's language . . . is what I find so beguiling about her work. Similes blow up the ordinary. Hyperbole extends throughout . . . O'Neill exceeds at inventing a place where magic really happens, where the mundane can become extraordinary.” —Liz Fischer Greenhill, The Rumpus

“What really shines here is O'Neill's writing. The author stuns with the vivid descriptions and metaphors that are studded throughout the book . . . O'Neill's writing grows ever more distinct and direct.” —Kirkus

“Wonderfully interesting and captivating.” —As the Plot Thins

“In her indelible portrait of troubled but lovable twin picaros Nouschka and Nicolas Tremblay, Heather O'Neill beautifully depicts what it's like to burn a little brighter than everyone else. A book for those of us who feel too much, The Girl Who Was Saturday Night perfectly captures the sad, strange moment when you realize you're no longer young.” —Marjorie Celona, author of Y