American Mirror: The Life and Art of Norman Rockwell (Hardcover) 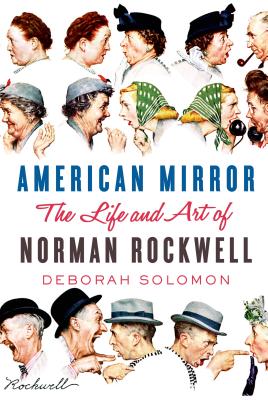 "Welcome to Rockwell Land," writes Deborah Solomon in the introduction to this spirited and authoritative biography of the painter who provided twentieth-century America with a defining image of itself. As the star illustrator of The Saturday Evening Post for nearly half a century, Norman Rockwell mingled fact and fiction in paintings that reflected the we-the-people, communitarian ideals of American democracy. Freckled Boy Scouts and their mutts, sprightly grandmothers, a young man standing up to speak at a town hall meeting, a little black girl named Ruby Bridges walking into an all-white school—here was an America whose citizens seemed to believe in equality and gladness for all.

Who was this man who served as our unofficial "artist in chief" and bolstered our country's national identity? Behind the folksy, pipe-smoking façade lay a surprisingly complex figure—a lonely painter who suffered from depression and was consumed by a sense of inadequacy. He wound up in treatment with the celebrated psychoanalyst Erik Erikson. In fact, Rockwell moved to Stockbridge, Massachusetts so that he and his wife could be near Austen Riggs, a leading psychiatric hospital. "What's interesting is how Rockwell's personal desire for inclusion and normalcy spoke to the national desire for inclusion and normalcy," writes Solomon. "His work mirrors his own temperament—his sense of humor, his fear of depths—and struck Americans as a truer version of themselves than the sallow, solemn, hard-bitten Puritans they knew from eighteenth-century portraits."

Deborah Solomon, a biographer and art critic, draws on a wealth of unpublished letters and documents to explore the relationship between Rockwell's despairing personality and his genius for reflecting America's brightest hopes. "The thrill of his work," she writes, "is that he was able to use a commercial form [that of magazine illustration] to thrash out his private obsessions." In American Mirror, Solomon trains her perceptive eye not only on Rockwell and his art but on the development of visual journalism as it evolved from illustration in the 1920s to photography in the 1930s to television in the 1950s. She offers vivid cameos of the many famous Americans whom Rockwell counted as friends, including President Dwight Eisenhower, the folk artist Grandma Moses, the rock musician Al Kooper, and the generation of now-forgotten painters who ushered in the Golden Age of illustration, especially J. C. Leyendecker, the reclusive legend who created the Arrow Collar Man.

Although derided by critics in his lifetime as a mere illustrator whose work could not compete with that of the Abstract Expressionists and other modern art movements, Rockwell has since attracted a passionate following in the art world. His faith in the power of storytelling puts his work in sync with the current art scene. American Mirror brilliantly explains why he deserves to be remembered as an American master of the first rank.

Deborah Solomon is the author of two previous biographies of American artists: Jackson Pollock: A Biography and Utopia Parkway: The Life and Work of Joseph Cornell (FSG, 1997). She has written about art and culture for many publications, and her weekly interview column appeared in The New York Times Magazine from 2003 to 2011. She lives in New York with her family.

“In her engaging and ultimately sad biography of Norman Rockwell, Deborah Solomon fills in the partly known life of one of America's most famous and popular illustrator-artists . . . Ms. Solomon's book fully justifies a fresh look at his life. An art critic and author of biographies of Joseph Cornell and Jackson Pollock and a frequent contributor to The New York Times, she offers something new, entertaining and disturbing. Her challenge was to explain a life utterly different from Rockwell's humorous and optimistic paintings. She has told his story with a breadth of facts and narrative finesse. It is a revelation.” —John Wilmerding, The New York Times

“Deborah Solomon has created a biography as vivid and touching as a Rockwell interior. This is the definitive biography of an American master who came in through the back door.” —Steve Martin, author of An Object of Beauty

“American Mirror is a masterpiece--vivid, forthright and insightful. Through superb research and keen interpretation, Deborah Solomon tells the story of an artist so many thought they knew well, and perhaps did not know at all. An epic achievement.” —Laurie Norton Moffatt, director of the Norman Rockwell Museum

“Norman Rockwell turns out not to have lived in the America he invented, the republic of station wagons, Santa Claus, and good citizenship. Deborah Solomon offers up a textured portrait of the man who carried no pictures of his family and never met a therapist he didn't like. Solomon masters foreground, background, and middle ground in this taut, beautifully written biography.” —Stacy Schiff, author of Cleopatra: A Life and winner of the Pulitzer Prize for Biography

“Deborah Solomon has done the culture a huge favor by placing Norman Rockwell among the most important American artists of the twentieth century. She reveals Rockwell in all his contradictions--celebrant of family values but indifferent husband, self-professed New Englander but restless traveler, apolitical for most of his life but by the end a passionate believer in civil rights. This is a great biography of a singular American genius, who has long deserved it.” —Bruce McCall, New Yorker illustrator

“In American Mirror, Deborah Solomon has set herself, pointillist detail by detail, to unraveling the mystery of Norman Rockwell--the friendliest of painters who turns out to be the most complex of men. This is that rarest of books: the biography as page-turner, leading you effortlessly onwards.” —Daphne Merkin, author of Enchantment

“Deborah Solomon's beautiful, complex life of Norman Rockwell shows how his beloved pictures--many of which appeared in the Saturday Evening Post--expressed Americans' hopes for the nation, even though they did not often show the real America.” —Alan Brinkley, author of The Publisher: Henry Luce and His American Century

“Don't be fooled by the controversy into thinking that this book is about Rockwell's sexual impulses. It isn't. Solomon traces his evolution as an artist, laying it alongside struggles in his own life. The result is a fascinating portrait of an underappreciated and often ridiculed artist.” —Stephen L. Carter, Bloomberg (Best Books of 2013)

“American Mirror: The Life and Art of Norman Rockwell is a masterpiece of the biographer's art.” —Lee Siegel, The New Yorker's "Page-Turner" blog

“Esteemed art critic and biographer Solomon turns our perception of Norman Rockwell inside out in this fast-paced yet richly interpretative inquiry . . . Solomon's penetrating and commanding biography is brimming with surprising details and provocative juxtapositions.” —Donna Seaman, Booklist (starred review)

“In anticipation of Thanksgiving, every American who cherishes the traditions that make this country great should acquire a copy of American Mirror, Deborah Solomon's brilliantly insightful chronicle of the life of illustrator Norman Rockwell.” —Jonathan Lopez, The Wall Street Journal

“American Mirror is a book of dazzling and accomplished detail.” —Ben Davis, Slate

“[American Mirror] is a biography of the highest caliber . . . Solomon's intimate language is complemented by brisk pacing, providing a narrative that feels refreshing, nimble, and keyed into the present.” —Rebecca Rubenstein, Kirkus Reviews

“Rockwell is a beloved figure in American art, and Solomon's compelling portrait offers the attention and insight that this complex man deserves.” —Alice Cary, Bookpage

“[A] wonderful biography. . . . [Deborah Solomon] does a beautiful job of rescuing a man who became something of a cliche and making him fresh again.” —Garrison Keillor, Tampa Bay Times