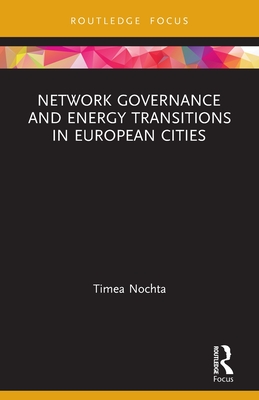 This book investigates and evaluates the opportunities and limitations of network governance in building local capacity for energy infrastructure governance.

Presenting a comparative analysis of three city cases from across Europe- Birmingham, Frankfurt and Budapest- this book demonstrates how local factors shape the prospect of network governance to support low-carbon energy transitions. It maps out existing governance networks, highlighting the actors involved and their interactions with one another, and also discusses the role and embeddedness of networks in the urban governance of low-carbon energy. Drawing on case study evidence, Nochta develops a comparative analysis which discusses the intricate connections between network characteristics, context and impact. It highlights that organisational fragmentation; the complexity of the low-carbon energy problem and historical developments all influence network characteristics in terms of degree of integration and vertical (hierarchical) power relationships among network actors. Overall, the book concludes that understanding such links between context and networks is crucial when designing and implementing new governance models aimed at facilitating and governing low-carbon urban development.

Low-Carbon Energy Transitions in European Cities will be of great interest to scholars of energy policy, urban governance and sustainability transitions.