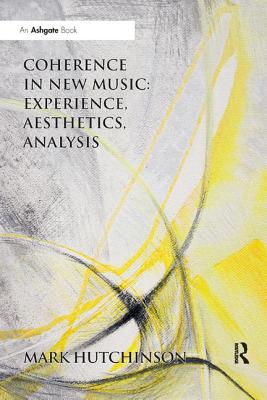 What does it mean to talk about musical coherence at the end of a century characterised by fragmentation and discontinuity? How can the diverse influences which stand behind the works of many late twentieth-century composers be reconciled with the singular immediacy of the experiences that they can create? How might an awareness of the distinctive ways in which these experiences are generated and controlled affect the way we listen to, reflect upon and write about this music? Mark Hutchinson outlines a novel concept of coherence within Western art music from the 1980s to the turn of the millennium as a means of understanding the work of a number of contemporary composers, including Thomas Ad's, Kaija Saariaho, Tōru Takemitsu and Gy rgy Kurt g, whose music cannot be fitted easily into a particular compositional school or analytical framework. Coherence is understood as a multi-layered phenomenon experienced, above all, in the act of listening, but reliant upon a variety of other aspects of musical experience, including compositional statements, analysis, and connections of aesthetic, as well as listeners' own, imaginative conceptualisations. Accordingly, the approach taken here is similarly multi-faceted: close analytical readings of a number of specific works are combined with insights drawn from philosophy and aesthetics, music perception, and critical theory, with a particular openness to novel metaphorical presentations of basic musical ideas about form, language and time.

Mark Hutchinson is a Lecturer in Music at York St John University. His research focuses upon creative approaches towards the analysis of recent contemporary music, and in particular upon ways of bridging the gap between listening, analysis and critical thought. He is also an active piano accompanist and oboist.