On the Horizon Signed Edition (Hardcover) 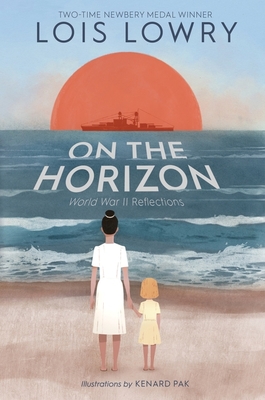 An interesting mixed-memoir in vignettes. Lowry, who was a four-year-old military kid living in Hawaii at the time of the Pearl Harbor bombing, sifts through her own memories while detailing the lives of those lost in the bombings. She then does the same with the atomic bombing in Hiroshima, dipping into the lives lost and memories remaining there, before reverting back to memoir in order to examine her own experience of moving to Japan as an 11-year-old. Reading this book feels like visiting a memorial. Great for a history-lover who has read it all and is looking for something fresh and unique. — Nadja Tiktinsky

Lois Lowry looks back at history through a personal lens as she draws from her own memories as a child in Hawaii and Japan, as well as from historical research, in this stunning work in verse for young readers.

On the Horizon tells the story of people whose lives were lost or forever altered by the twin tragedies of Pearl Harbor and Hiroshima. Based on the lives of soldiers at Pearl Harbor and civilians in Hiroshima, On the Horizon contemplates humanity and war through verse that sings with pain, truth, and the importance of bridging cultural divides. This masterful work emphasizes empathy and understanding in search of commonality and friendship, vital lessons for students as well as citizens of today’s world. Kenard Pak’s stunning illustrations depict real-life people, places, and events, making for an incredibly vivid return to our collective past.

In turns haunting, heartbreaking, and uplifting, On the Horizon will remind readers of the horrors and heroism in our past, as well as offer hope for our future.

Lois Lowry is the author of more than forty books for children and young adults, including the New York Times bestselling Giver Quartet and popular Anastasia Krupnik series. She has received countless honors, among them the Boston Globe-Horn Book Award, the Dorothy Canfield Fisher Award, the California Young Reader’s Medal, and the Mark Twain Award. She received Newbery Medals for two of her novels, Number the Stars and The Giver. Her first novel, A Summer to Die, was awarded the International Reading Association’s Children’s Book Award. Ms. Lowry lives in Maine. www.loislowry.com Twitter @LoisLowryWriter Ken Pak grew up in Baltimore and Howard County, Maryland. After studying at Syracuse University and California Institute of the Arts, he worked at Dreamworks Animation and Walt Disney Feature Animation. Visit his website at pandagun.com and on Twitter and Instagram @kenardpak.

"Lois Lowry has had an impressive career. She’s written more than 40 books and won the Newbery Medal twice, but she's never written a story in verse until now."—NPR Weekend Edition

"With vignettes about those who lost their lives—from sailors aboard the USS Arizona to civilians in Hiroshima—Lowry asks young readers to empathize with people on all sides of the conflict.... Lowry’s message is simple: We all benefit from a more peaceful world."—TIME for Kids

★ "On the Horizon’s remarkable poems are a powerful reminder of our shared humanity in times of conflict and war. Simply put, they are an extraordinary gift from one of America’s most distinguished writers."—BookPage, STARRED review

★ "[On the Horizon is] deeply felt and emotive, not about sides but about people, sure to lead readers to think deeply on these dual tragedies of war. A must for all collections."—Booklist, STARRED review

★ "All the personal stories—of sailors, civilians, and Lowry herself—are grounding.... Pak's graphite illustrations are like still shots of history, adding to the emotion and somber feeling. A beautiful, powerful reflection on a tragic history."—Kirkus, STARRED review

★ "On the Horizon’s remarkable poems are a powerful reminder of our shared humanity in times of conflict and war. Simply put, they are an extraordinary gift from one of America’s most distinguished writers."—BookPage, STARRED review

"Part memoir, part history, this is a powerful reminder that damage done will be remembered for many decades to come." –Publishers Weekly

"This series of beautiful, moving, and sometimes horrifying poems gives a voice to the young men on the USS Arizona and offers an equally moving tribute to the survivors of Hiroshima....touching."—School Library Journal

“[E]ntries… are deft and compelling…. and the experience of being an occupier in post-war Japan is a fraught and interesting one.” —The Bulletin of the Center for Children's Books