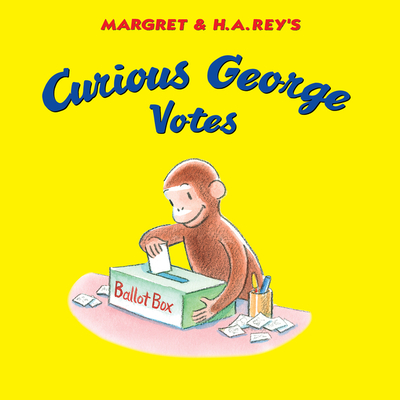 It’s election day at the elementary school, and Curious George gets to join in the vote on the new school mascot!

It's election day, and Curious George is ready to cast his vote!

On election day at the elementary school, Curious George and his friend the Man with the Yellow Hat are visiting just in time to see the kids voting for their new school mascot. George can’t resist getting in on the fun. He learns about the candidates, collects campaign stickers, and casts a lot of ballots. But what will happen when his hijinks start to get in the way of the vote? And who will win the big election?

Hans and Margret Rey created many books during their lives together, including Curious George, one of the most treasured classics of all time, as well as other favorites like Spotty and Pretzel. But it was their rambunctious little monkey who became an instantly recognizable icon. After the Reys escaped Paris by bicycle in 1940 carrying the manuscript for the original Curious George, the book was published in America in 1941. More than 200 Curious George titles followed, with 75 million books sold worldwide. Curious George has been successfully adapted into a major motion picture and an Emmy-winning television show on PBS.