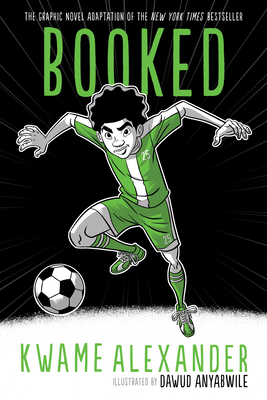 Twelve-year-old Nick learns the power of words as he wrestles with problems at home, stands up to a bully, and tries to impress the girl of his dreams. Helping him along are his best friend and sometimes teammate Coby, and The Mac, a rapping librarian who gives Nick inspiring books to read.

This electric and heartfelt novel-in-verse bends and breaks as it captures all the thrills and setbacks, action and emotion of a World Cup match.

"A novel about a soccer-obsessed tween boy written entirely in verse? In a word, yes. Kwame Alexander has the magic to pull off this unlikely feat, both as a poet and as a storyteller. " —The Chicago Tribune

Can’t nobody stop you

Can’t nobody cop you…

Kwame Alexander is a poet, educator, and the New York Times best-selling author of more than thirty-five books, including Rebound, the follow-up to his Newbery medal–winning middle grade novel, The Crossover. Some of his other works include Booked, which was longlisted for the National Book Award, The Playbook: 52 Rules to Help You Aim, Shoot, and Score in this Game of Life, Swing, and the picture books Out of Wonder and The Undefeated, which was longlisted for the National Book Award and won the Caldecott Medal, a Newbery Honor, and the Coretta Scott King Illustrator Award.

He is a regular contributor to NPR's Morning Edition, currently serving as their poet ambassador.

“Alexander’s poetic storytelling and knack for language wrap around fun and expressive artwork to make for an inarguably charming format that may especially hold appeal for reluctant readers.”—Kirkus

“Conveying an important mental health message, this graphic novel adaptation is one more ­feather in the cap of a truly iconic author.”—School Library Journal