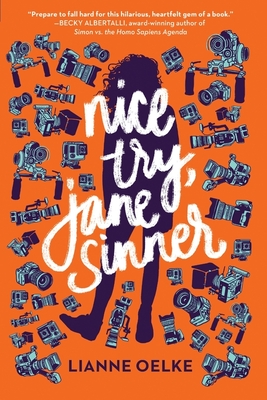 By Lianne Oelke
$9.99
Click Title for IN STOCK Location

Jane has managed to get herself expelled from high school. She joins a college student's homemade reality tv show to prove herself/win an old car. She's so stable!

Jane is two parts acerbic wit, one part scheming mad scientist, and one part sad sack. You will find in no time that she's one of the most likeable and engaging characters in the YA world. Prepare to die laughing (and be moved).

Recommended in particular for those who loved Vizzini's It's Kind of a Funny Story, Jesse Andrews' sidesplitting odes to contemporary teenage existence (The Haters; Me, Earl, and the Dying Girl), and Arnold's sarcasm-laden Mosquitoland.

“Jane Sinner snarked her way into my heart, and she’s never leaving. Prepare to fall hard for this hilarious, heartfelt gem of a book.” —Becky Albertalli, author of Simon vs. The Homo Sapiens Agenda

It’s Kind of a Funny Story meets Daria in the darkly hilarious tale of a teen’s attempt to remake her public image and restore inner peace through reality TV. The only thing seventeen-year-old Jane Sinner hates more than failure is pity. After a personal crisis and her subsequent expulsion from high school, she’s going nowhere fast. Jane’s well-meaning parents push her to attend a high school completion program at the nearby Elbow River Community College, and she agrees, on one condition: she gets to move out.

Jane tackles her housing problem by signing up for House of Orange, a student-run reality show that is basically Big Brother, but for Elbow River Students. Living away from home, the chance to win a car (used, but whatever), and a campus full of people who don’t know what she did in high school . . . What more could she want? Okay, maybe a family that understands why she’d rather turn to Freud than Jesus to make sense of her life, but she’ll settle for fifteen minutes in the proverbial spotlight.

As House of Orange grows from a low-budget web series to a local TV show with fans and shoddy T-shirts, Jane finally has the chance to let her cynical, competitive nature thrive. She’ll use her growing fan base, and whatever Intro to Psychology can teach her, to prove to the world—or at least viewers of substandard TV—that she has what it takes to win.

Lianne Oelke has a degree in philosophy and works in the film industry—which may explain a lot about her debut novel, Nice Try, Jane Sinner. Or not. She lives, camps, and thinks about cats in Vancouver, Canada. www.lianneoelke.com
Twitter: @lianneoekle
Instagram: @lianneoekle

"[Nice Try, Jane Sinner] is witty with a fresh narrative voice. It is rare to find a YA book that discusses faith and religion, but Oelke handles Jane’s religious questioning in an authentic way...Readers will enjoy rooting for her on House of Orange and in life."
— School Library Journal

"Get ready for the raunchiness, drama and cringe-worthy obsession that comes with reality TV in this cheeky Canadian import."—BCCB