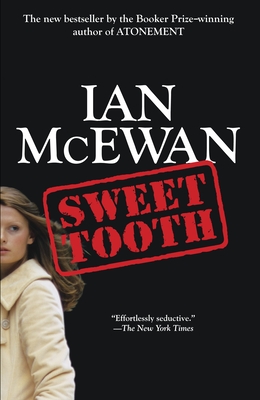 In 1972 Cambridge graduate Serena Frome is recruited by MI5, the British Secret Service. After boring months filing reports, she's sent to check out the politics of a young writer. A love affair begins, with dire results. McEwan creates the paranoid Cold War atmosphere and the duplicitous nature of espionage with his customary wit and elegance. — Louise Jones

A gripping novel that straddles the line between sophisticated love story and spy thriller. Serena Frome is a flawed but lovable heroine who keeps you on your toes. One of my favorite books this summer. — Cheryl Cornwell

“Cold War espionage, illicit love affairs, and a coming-of-age story all wrapped into one? Only McEwan could pull off this ambitious story. Meet Serena: just out of university, recruited for MI5, and chosen for a special project with the code name Sweet Tooth. Serena is beautiful, intelligent, and becoming sure of herself as she settles into her adult life. Her confidence is shaken, however, as Sweet Tooth gets underway and the truth about friends, lovers, and MI5 colleagues comes to the surface. Once again, McEwan presents a beautifully crafted novel, one that keeps you turning the pages while encouraging deeper thoughts about love and trust.”
— Kate Bonilla, Third Street Books, McMinnville, OR

A New York Times Notable Book
One of the Best Books of the Year: San Francisco Chronicle, Seattle Times

Cambridge student Serena Frome's beauty and intelligence make her the ideal recruit for MI5. The year is 1972. The Cold War is far from over. England's legendary intelligence agency is determined to manipulate the cultural conversation by funding writers whose politics align with those of the government. The operation is code named "Sweet Tooth." Serena, a compulsive reader of novels, is the perfect candidate to infiltrate the literary circle of a promising young writer named Tom Haley. At first, she loves the stories. Then she begins to love the man. How long can she conceal her undercover life? To answer that question, Serena must abandon the first rule of espionage: trust no one.

Ian McEwan is the bestselling author of fourteen previous books, including the novels Solar; On Chesil Beach; Saturday; Atonement, winner of the National Book Critics Circle Award and the W. H. Smith Literary Award; The Comfort of Strangers and Black Dogs, both shortlisted for the Booker Prize; Amsterdam, winner of the Booker Prize; and The Child in Time, winner of the Whitbread Award. He has also authored the story collections First Love, Last Rites, winner of the Somerset Maugham Award, and In Between the Sheets. He lives in England.

“McEwan’s most stylish and personal book to date. . . . The year’s most intensely enjoyable novel.” —The Daily Beast

“Ian McEwan’s delicious new novel provides all the pleasures one has come to expect of him: pervasive intelligence, broad and deep knowledge, elegant prose, subtle wit and, by no means least, a singularly agreeable element of surprise.” —The Washington Post

“A tightly crafted, exquisitely executed page-turner—a post-modern hall of mirrors asking savvy questions about identity (with an unreliable narrator and a Martin Amis cameo), all concealed in the immersive trappings of a Victorian novel complete with a marriage plot. There’s such rich pleasure and vulnerability in McEwan’s storytelling, such style and heart in his well-honed sentences.” —USA Today

“Extremely clever in both the British and American senses . . . his most cheerful book by far.” —The New York Times Book Review

“McEwan has pulled off something remarkable here: Sweet Tooth is a suspenseful plot-and-character-driven novel with an unexpected postmodern twist. It’s Jane Austen meets John Le Carré meets John Barth . . . [Its] delights turn out to be considerable.” —The Boston Globe

“What could be a better match—Ian McEwan and a spy story? The English writer is a thinking person’s best-seller, whose intelligent, tightly plotted novels, narrated in careful prose, address the pressing social and political issues of our days.” —San Francisco Chronicle

“An espionage story that, at its heart, is about literature. . . . Ruminate[s] on writers, writing, and the power of stories.” —Entertainment Weekly

“Spy novels often boast plenty of twists but few real surprises. Sweet Tooth, however, includes a plot development at once unpredictable and plausible. Such is McEwan’s dexterity in crafting this game-changer, that not only does it mesh with the story but also enrobes what came before with an extra layer of meaning. . . . Life-affirming and almost defiantly romantic.” —The Miami Herald

“An engaging book that’s as much suspenseful drama as it is romantic love story.” —NPR Books

“Ian McEwan’s delicious new novel provides all the pleasures one has come to expect of him: pervasive intelligence, broad and deep knowledge, elegant prose, subtle wit and, by no means least, a singularly agreeable element of surprise.” —Kansas City Star

“The novel’s pleasures are multiple and, as always with McEwan, they begin with the storytelling.” —Bloomberg Businessweek

“McEwan, a contemporary master of narrative . . . brings suspense and wit to the telling. . . .  Sweet Tooth moves elegantly toward its inevitable conclusion.” —The Seattle Times

“A wisecracking thriller hightailing between love and betrayal, with serious counter-espionage credentials thrown in. . . . This is ultimately a book about writing, wordplay and knowingness.” —The Sunday Telegraph (London)

“Thoroughly clever. . . . A sublime novel about novels, about writing them and reading them and the spying that goes on in doing both. . . . McEwan has spied on real life to write Sweet Tooth, and in reading it we are invited to spy on him. . . . Rich and enjoyable.” —Financial Times

“McEwan fans won’t be disappointed by Sweet Tooth, and newcomers to the author will be meeting him at the top of his game.” —The Globe and Mail (Toronto)