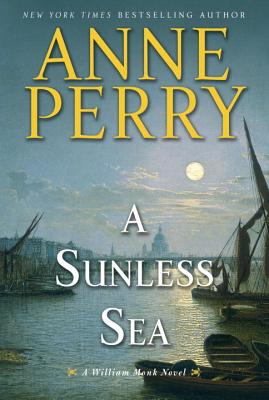 A woman is found slaughtered on the London docks. Clues suggest she was a high end prostitute, but Superintendent Monk thinks differently. Does this death tie into the suicide of a physician and a vanished report on the misuse of opium? And if so, why? His investigation exposes secrets best left buried and a desperate killer that will do anything to make sure they stay that way. Touching on the shocking events that occurred in Acceptable Loss, Perry brings A Sunless Sea to a stunning conclusion. — Sarah Donner

Anne Perry’s spellbinding Victorian mysteries, especially those featuring William Monk, have enthralled readers for a generation. The Plain Dealer calls Monk “a marvelously dark, brooding creation”—and, true to form, this new Perry masterpiece is as deceptively deep and twisty as the Thames.

As commander of the River Police, Monk is accustomed to violent death, but the mutilated female body found on Limehouse Pier one chilly December morning moves him with horror and pity. The victim’s name is Zenia Gadney. Her waterfront neighbors can tell him little—only that the same unknown gentleman had visited her once a month for many years. She must be a prostitute, but—described as quiet and kempt—she doesn’t appear to be a fallen woman.

What sinister secrets could have made poor Zenia worth killing? And why does the government keep interfering in Monk’s investigation?

While the public cries out for blood, Monk, his spirited wife, Hester, and their brilliant barrister friend, Oliver Rathbone, search for answers. From dank waterfront alleys to London’s fabulously wealthy West End, the three trail an ice-blooded murderer toward the unbelievable, possibly unprovable truth—and ultimately engage their adversaries in an electric courtroom duel. But unless they can work a miracle, a monumental evil will go unpunished and an innocent person will hang.

Anne Perry has never worn her literary colors with greater distinction than in A Sunless Sea, a heart-pounding novel of intrigue and suspense in which Monk is driven to make the hardest decision of his life.

Praise for A Sunless Sea

“Much more than a whodunit, this book [is] possibly the author’s best yet.”—Publishers Weekly (starred review)

Anne Perry is the bestselling author of two acclaimed series set in Victorian England: the William Monk novels, including "Acceptable Loss" and "Execution Dock, "and the Charlotte and Thomas Pitt novels, including "Dorchester Terrace" and "Treason at Lisson Grove." She is also the author of a series of five World War I novels, as well as nine holiday novels, most recently "A Christmas Homecoming, " and a historical novel, "The Sheen on the Silk, " set in the Byzantine Empire. Anne Perry lives in Scotland.

PRAISE FOR ANNE PERRY AND HER WILLIAM MONK NOVELS

“Masterful storytelling and moving dialogue . . . [the] best in the series to date.”—The Star-Ledger

“[An] engrossing page-turner . . . There’s no one better at using words to paint a scene and then fill it with sounds and smells than Anne Perry.”—The Boston Globe

Death of a Stranger

“[A] tantalizing puzzle . . . At last, in Death of a Stranger, the secrets of Monk’s past are dramatically revealed.”—The New York Times Book Review