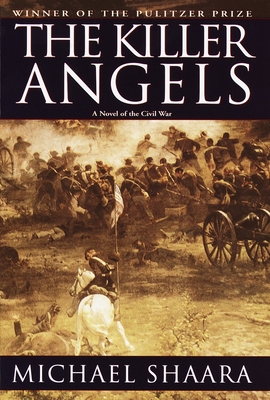 After more than a quarter of a century and three million copies in print, Michael Shaara’s Pulitzer Prize-winning Civil War classic, The Killer Angels, remains as vivid and powerful as the day it was originally published. This handsome new hardcover edition introduces a whole new generation to Shaara’s masterpiece–and offers readers everywhere a literary keepsake for years to come.

July 1863. The Confederate Army of Northern Virginia is invading the North. General Robert E. Lee has made this daring and massive move with seventy thousand men in a determined effort to draw out the Union Army of the Potomac and mortally wound it. His right hand is General James Longstreet, a brooding man who is loyal to Lee but stubbornly argues against his plan. Opposing them is an unknown factor: General George Meade, who has taken command of the Army only two days before what will be perhaps the crucial battle of the Civil War.

In the four most bloody and courageous days of our nation’s history, two armies fight for two conflicting dreams. One dreams of freedom, the other of a way of life. More than rifles and bullets are carried into battle. The soldiers carry memories. Promises. Love. And more than men fall on those Pennsylvania fields. Bright futures, untested innocence, and pristine beauty are also the casualties of war.

The Killer Angels is unique, sweeping, unforgettable–a dramatic re-creation of the battleground for America’s destiny.

“The best and most realistic historical novel about war I have ever read.”
–GENERAL H. NORMAN SCHWARZKOPF

“My favorite historical novel . . . A superb re-creation of the Battle of Gettysburg, but its real importance is its insight into what the war was about, and what it meant.”
–JAMES M. MCPHERSON
Author of Battle Cry of Freedom

“Remarkable . . . A book that changed my life . . . I had never visited Gettysburg, knew almost nothing about that battle before I read the book, but here it all came alive.”
–KEN BURNS
Filmmaker, The Civil War

“Shaara carries [the reader] swiftly and dramatically to a climax as exciting as if it were being heard for the first time.”
–The Seattle Times