The Song of the Machine: From Disco to DJs to Techno, a Graphic Novel of Electronic Music (Hardcover) 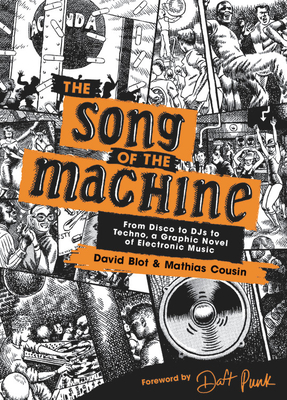 A pulsating graphic novel on the epic history of electronic music, from the heyday of disco in the 1970s to the rave culture of the 1990s and beyond.

With a foreword from house music legends Daft Punk, The Song of the Machine is a celebration of a musical wave that swept across the world over decades, demographics, and dance styles. Originally published in 2000 in France, and updated through today for this first English edition, the electrifying narrative introduces readers to the harbingers of the genre, such as David Mancuso, Larry Levan, and Frankie Knuckles (known as the "Godfather of House Music"); the prototypes of modern-day nightclubs and dance venues, like The Loft and Studio 54 in New York City, the Palace in Paris, and the Hacienda in Manchester, England, and of course, the technology and machines that first produced and synthesized the records that galvanized a movement.
Told through exciting illustrations that evolve with the era they describe, and complete with specially curated playlists for each and every decade, The Song of the Machine recounts the influences and inspirations, the people and epic parties that created and defined this revolutionary music.

David Blot was born in 1970. He's a radio host on Radio Nova. During the 1990's, he cofounded the internationally renowned "Respect" parties, the birthplace of French House. He lives in France.
Mathias Cousin was born in 1972. After studying graphic art at Penninghen school in Paris, he worked with newspapers and magazines. The Song of the Machine is his only comic book. He died in 2002.

"Le Chant de la machineis one of these unclassifiable books, a dazzling meteor.''—GQ

"Le Chant was a fundamental book and remains a cornerstone of any self-respecting musical library.—Trax

"For its visual boldness, its spirit and its historiographical relevance, Le Chant dela machine reads as a classic."—Libération