Who is Maud Dixon?: A Novel (Paperback) 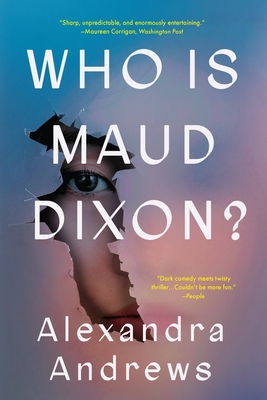 Florence Darrow has always felt she was destined for greatness, but after a disastrous affair with her married boss, she starts to doubt herself. All that changes when she sets off for Morocco with her new boss, the celebrated but reclusive author Maud Dixon. Amidst the colorful streets of Marrakesh and the wind-swept beaches of the coast, Florence begins to feel she’s leading the sort of interesting, cosmopolitan life she deserves.

But when she wakes up in the hospital after a terrible car accident, with no memory of the previous night—and no sign of Maud—a dangerous idea begins to take form. . .

Alexandra Andrews has worked as a journalist, editor and copywriter in New York and Paris. Who Is Maud Dixon? is her first novel. She lives in Brooklyn with her husband and children.

“Who Is Maud Dixon? has enough twists and turns (really good ones!) to make you dizzy for a week. Dizzy with joy! By the end of the book you’ll start wondering if author Alexandra Andrews might be a murderer herself.”—James Patterson

"Once the two women land in Morocco, the sinister game of shedding identities begins and Maud and Florence begin tossing their passports back and forth like hot potatoes . . . or hand grenades. Who Is Maud Dixon? turns out to be much more than a question about authorship; indeed, it’s a question fraught with life and death consequences. Andrews’s novel is sharp, unpredictable and enormously entertaining. To say anything more would ruin the fun of reading — and being lightly appalled — by it."—Maureen Corrigan, Washington Post

"Fans of psychological thrillers like Patricia Highsmith’s "The Talented Mr. Ripley" will love Andrews' debut novel. . . . the story is full of twists and turns that will leave you hooked."—Harlan Coben, TODAY

“Who Is Maud Dixon? combines a rapid-fire plot with larger questions of authenticity and authorship, creating an edgy and distinct work that is as compelling as the mysterious figure at its center.”—Chloe Schama, Vogue

“In-jokes about the publishing industry. Check. References to Lydia Davis and Renata Adler. Check. Wicked and ambitious female Ripley-like characters. Check. Andrews’s amusingly mean-spirited thriller ticks off a lot of boxes — so much so that I basically plowed through this unexpected, high-low of a surprise.”—Vulture/NY Magazine

“The two women at the center of this story are complicated, to say the very least. Full of diabolical twists and turns and lush settings (Morocco, anyone?), this is one of the best thrillers out this year.”—Fiona Davis, Good Morning America

“In this addition to the list of reasons one should not travel to Morocco with a too-good-to-be-true new acquaintance, the dissatisfied young editorial staffer with lofty literary goals and a penchant for stealing her roommate’s yogurts falls into a dream gig assisting her mysterious favorite writer, Maud Dixon; false identities and murderous hijinks ensue."—Vanity Fair

"The debut novel everyone will be talking about this spring is a twisty, spicy tête-à-tête that pits two very determined women against each other — but in a good way."—Entertainment Weekly

“Smart, slyly clever debut . . . . Andrews skillfully delves into each woman’s true personality, driving Who Is Maud Dixon? into an incisive look at ambition, greed, identity and celebrity worship. . . . Andrews’ wicked sense of humor and intelligent plotting deliver a briskly paced novel filled with inventive twists reminiscent of “All About Eve,” “Gaslight” and any Patricia Highsmith novel. Who Is Maud Dixon? establishes Andrews as an author to watch.”—South Florida Sun-Sentinel

“A sparkling debut that will keep you guessing.”—New York Post

"Part Elena Ferrante, part Patricia Highsmith–themed thriller, Who Is Maud Dixon? is set to be one of the buzziest debut novels of the year."—Wall Street Journal

"A sparkling debut that will keep you guessing."—New York Post

"Identity theft takes on a new meaning in this fresh and arresting thriller. . . . Andrews’ debut is a page-turning, surprising read."—Booklist (starred review)

“Keen-eyed satire with the sly unpredictability of a first-rate thriller.”—Airmail

“Set aside some time for this one, because once you crack it open, you won’t want to put it down until every last question is answered.”—Book Reporter

"Stylish and sharp, with wicked hairpin turns, Who Is Maud Dixon? is part Patricia Highsmith, part All About Eve and pure fun.”—Maria Semple, author of Where'd You Go, Bernadette?

“Smoothly written, nimbly plotted—yet also buzzing with an irresistible intensity and relish. Roaring round of applause here.”—AJ Finn, author of The Woman in the Window

“A Hitchcockian mashup about egos in every sense of the word, Who is Maud Dixon? never sacrifices graceful prose and acute insights for its breakneck pace. ‘Unputdownable’ has become overused praise, but it fully applies here; it is impossible to start Alexandra Andrews’s novel and not feel compelled to speed through its switchback twists to its conclusion.”—Teddy Wayne, author of Apartment

"Who is Maud Dixon? is clever, cunning, and diabolical in the best possible way. Anyone longing for a good old-fashioned thrill need look no further."—Ann Patchett, author of The Dutch House

“Captivating debut! Who is Maud Dixon? is a beautifully written literary thriller with a sumptuous Moroccan setting. What’s not to love?"—Elin Hilderbrand, author of 28 Summers

“Who Is Maud Dixon? channels the spirit of Patricia Highsmith at her finest: Alexandra Andrews' deliciously witty, surprising and sly novel will keep you riveted to the last page.”—Claire Messud, author of The Burning Girl

“Cunningly plotted . . . . Who Is Maud Dixon? is a wickedly fun study in deception, secrets, striving and longing. Andrews’s stylish, intricate debut novel showcases deft prose and expert use of tone and atmosphere. What means might one justify to grasp the life she really wants and (she’s tempted to believe) deserves? These memorable pages hold one possible answer.”—Shelf Awareness