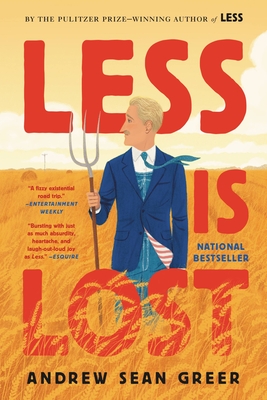 This is book number 2 in the The Arthur Less Books series.

Life has delivered a couple of body blows to Arthur Less in this engaging sequel to the author's Pulitzer Prize-winning novel. His ex-lover and mentor, Robert Brownburn, has died and his estate is demanding that Less pay the back rent on the property where he has been living. Faced with unexpected debt, Less reluctantly accepts a job writing a piece about the notoriously disagreeable H.H.H. Mandern. It takes him on a cross-country odyssey and an edgy reunion with his estranged father. For all his style and polish, Arthur Less frequently displays an innocence that is, at times, downright endearing. How else can anyone describe a man who thinks that sporting a handlebar mustache will ease his peril in a homophobic world? — Alden Graves

Less Is Lost is the delightful sequel to Greer’s Pulitzer-winning novel Less. Arthur Less, that most flappable of protagonists, is sent into yet another crisis for the unpaid back rent he owes on his ex-lover’s San Francisco apartment. Once again accepting all of the gigs that come his way, Less sets out for America in what will prove to be another odyssey of humiliations. Through the south and despite his attempts to camouflage being gay with copious American flags on his RV, flip-flops, wraparound sunglasses, and a “hoot ‘n’ holler” T-shirt, he is identified and always asked about his accent. “European? Dutch?” By the end, Less will have to weather the death of his first love, a strained relationship with Freddy, his no longer absent father, hurricanes, accidentally flooding a campground, the return of H.H.H. Mandern, bizarre theater troupes, and another writer also named Arthur Less.

In the "wildly, painfully, funny" (David Sedaris) follow-up to the best-selling and Pulitzer Prize-winning Less: A Novel, the awkward and lovable Arthur Less returns in an unforgettable road trip across America.

“Go get lost somewhere, it always does you good.”

For Arthur Less, life is going surprisingly well: he is a moderately accomplished novelist in a steady relationship with his partner, Freddy Pelu. But nothing lasts: the death of an old lover and a sudden financial crisis has Less running away from his problems yet again as he accepts a series of literary gigs that send him on a zigzagging adventure across the US.

Less roves across the “Mild Mild West,” through the South and to his mid-Atlantic birthplace, with an ever-changing posse of writerly characters and his trusty duo – a human-like black pug, Dolly, and a rusty camper van nicknamed Rosina. He grows a handlebar mustache, ditches his signature gray suit, and disguises himself in the bolero-and-cowboy-hat costume of a true “Unitedstatesian”... with varying levels of success, as he continues to be mistaken for either a Dutchman, the wrong writer, or, worst of all, a “bad gay.”

We cannot, however, escape ourselves—even across deserts, bayous, and coastlines. From his estranged father and strained relationship with Freddy, to the reckoning he experiences in confronting his privilege, Arthur Less must eventually face his personal demons. With all of the irrepressible wit and musicality that made Less a bestselling, Pulitzer Prize-winning, must-read breakout book, Less Is Lost is a profound and joyous novel about the enigma of life in America, the riddle of love, and the stories we tell along the way.

Andrew Sean Greer is the Pulitzer Prize winning author of six works of fiction, including the bestsellers The Confessions of Max Tivoli and Less. Greer has taught at a number of universities, including the Iowa Writers Workshop, been a TODAY show pick, a New York Public Library Cullman Center Fellow, a judge for the National Book Award, and a winner of the California Book Award and the New York Public Library Young Lions Award. He is the recipient of a NEA grant, a Guggenheim Fellowship, and the 2018 Pulitzer Prize for Fiction. He lives in San Francisco.