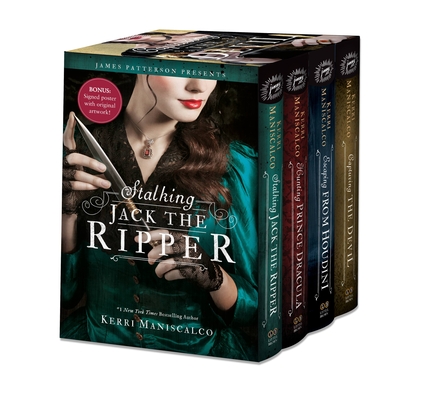 With writing hailed as "masterful," "engrossing," "compelling," and "marvelous," Kerri Maniscalco presents her wholly addictive and incredibly suspenseful, #1 bestselling mystery series in a complete gift set. Gorgeously packaged with an exclusive poster signed by the author, it's the perfect present for readers who love heart-pounding thrills, twists, and romance.
Stalking Jack the Ripper
In this spine-chilling gothic murder mystery set in gritty Victorian-era London, a resourceful lord's daughter named Audrey Rose Wadsworth and her brilliant friend Thomas Cresswell find themselves inescapably embroiled in the investigation of a ghastly serial killer known as Jack the Ripper.
Hunting Prince Dracula
In this haunting sequel, Audrey Rose and Thomas uncover bizarre murders deep in the castle of Prince Vlad the Impaler, otherwise known as Dracula. Could it be a copycat killer...or has the depraved prince been brought back to life?
Escaping From Houdini
In their third harrowing adventure, Audrey Rose and Thomas find themselves aboard a luxurious ocean liner that becomes a floating prison of scandal, madness, and horror when passengers are murdered one by one...with nowhere to run from the killer.
Capturing the Devil
In the shocking finale to the bestselling series, Audrey Rose and Thomas are on the hunt for the elusive, sickening killer known as the White City Devil. A deadly game of cat-and-mouse has them fighting to stay one step ahead of the brilliant serial killer---or see their fateful romance cut short by unspeakable tragedy.

Kerri Maniscalco grew up in a semi-haunted house outside New York City, where her fascination with gothic settings began. In her spare time she reads everything she can get her hands on, cooks all kinds of food with her family and friends, and drinks entirely too much tea while discussing life's finer points with her cats. She is the author of the New York Times bestselling novels Stalking Jack the Ripper, Hunting Prince Dracula, Escaping From Houdini, and Capturing the Devil.

"There are plenty of suspects and red herrings as well as tense escalations....A scenic, twisty mystery."
--- Kirkus Reviews

"Maniscalco has created a serious, sharp-minded, and forward-thinking protagonist in Audrey Rose, whose fearlessness will endear her to readers looking for an engaging historical thriller. Abundant red herrings and a dash of romance round out this gruesome but engrossing story."
--- Publisher's Weekly

"Audrey is a young woman eager to use her brains and willing to flaunt society's rules....This mystery pays homage to classics like Doyle's Sherlock Holmes and Mary Shelley's Frankenstein [and] will satisfy those readers looking for historical mystery, a witty heroine, and a little romance."
---School Library Connection

"An entertaining debut full of twists and turns, perfect for fans of historical fiction and mystery."
--- School Library Journal

"Audrey Rose is a witty, resourceful feminist who refuses to bow to Victorian-era gender norms. This dark, gothic landscape is peopled with nuanced, diverse characters who keep readers enthralled. A gripping mystery with a compelling heroine and just the right touch of romance."
--- Kirkus Reviews

"Every sentence of this novel drips with decadence. The settings and Midnight Carnival performances are lush yet dangerous, beautiful yet terrifying. It was easy to understand just how Audrey Rose comes to be so enthralled with the Midnight Carnival and the performers because, as readers, we're put under the same exact spell.... Masterfully crafted."
--- Hypable