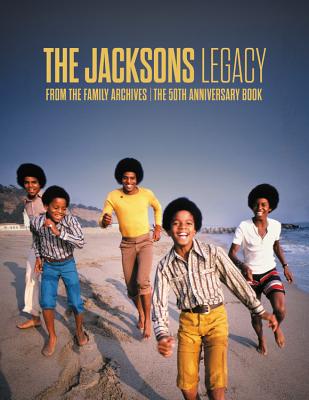 The only official, behind-the-scenes chronicle of the Jacksons' lives and careers, celebrating 50 years of one of the greatest acts of all time.

The Jacksons: Legacy is the first official book on the Royal Family of Pop. Unrivaled access to the family archives as well as the private collections of Jackie, Marlon and Tito Jackson, combined with 12 days of exclusive interviews with the brothers, reveals the untold, unseen, and utterly unforgettable story behind the legend that is the Jacksons.

The compelling tale unfolds from their childhood days living at 2300 Jackson Street in Gary, Indiana, through the years signed to Motown as the Jackson 5, their radical move to Epic as The Jacksons, the blossoming of their solo careers, the dizzying successes of the Victory tour, right up to the present day. A multitude of never-before-seen images, rarities and personal possessions help tell the story. Photos include intensely personal family pictures; all-angle shots of the first guitars the boys ever held; top photographer Harrison Funk's exclusive coverage of their professional lives; photos of Michael Jackson on tour with his brothers during the release of Off The Wall (1979) and the 1982 phenomenon that was Thriller-the best-selling album of all time; editions of magazines featuring the family; and official merchandise, right down to Jacksons-branded breakfast cereal boxes with giveaway 7" records attached.

Published to coincide with their 50th anniversary, The Jacksons: Legacy is the definitive behind-the-scenes chronicle of the Jacksons' lives and careers, celebrating 50 years of one of the greatest acts of all time.

The Jacksons are inductees into the Rock and Roll Hall of Fame, have five #1 albums, eighteen #1 hits, seventeen top ten albums, seventeen top 40 singles which include their most notable songs such as "ABC," "I Want You Back," "I'll Be There,""Rockin' Robin", and so many more.

Fred Bronson is music expert, appearing on both American Idol and CMT's Next Superstar. Beyond his television writing for shows such as The American Music Awards and Dick Clark's New Year's Rockin' Eve, he has written five books, which include The Sound of Music Family Scrapbook and Billboard's Hottest Hot 100 Hits.

"A hefty and handsome new coffee-table book that celebrates the band's 50th anniversary. . . It offers page after page of rare and striking images, ranging from the band's breakthrough to their various solo careers."—Craig Fehrman, Indianapolis Monthly