Every Word Is a Bird We Teach to Sing: Encounters with the Mysteries and Meanings of Language (Paperback) 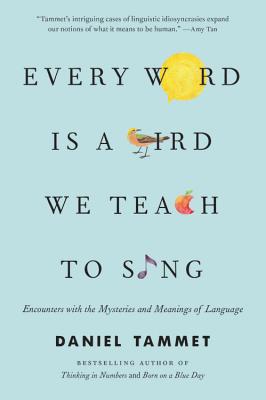 By Daniel Tammet
$16.99
Click Title for IN STOCK Location

Tammet is known as the world's smartest living person. He is a tenfold polyglot and endlessly fascinated by the intricacy of language itself. His essays explore linguistic questions like the creation and culture of Esperanto, the lessons of biblical translation, and how on earth a native Englishman made it on the exclusive Académie française. If you are a language nerd you will love this; if you're not you will become one. — Katelynne Shimkus

A mind-expanding, deeply humane tour of language by the bestselling author of Born on a Blue Day and Thinking in Numbers.

Is vocabulary destiny? Why do clocks "talk" to the Nahua people of Mexico? Will A.I. researchers ever produce true human-machine dialogue? In this mesmerizing collection of essays, Daniel Tammet answers these and many other questions about the intricacy and profound power of language.

In Every Word Is a Bird We Teach to Sing, Tammet goes back in time to London to explore the numeric language of his autistic childhood; in Iceland, he learns why the name Blær became a court case; in Canada, he meets one of the world's most accomplished lip readers. He chats with chatbots; contrives an "e"-less essay on lipograms; studies the grammar of the telephone; contemplates the significance of disappearing dialects; and corresponds with native Esperanto speakers - in their mother tongue.

A joyous romp through the world of words, letters, stories, and meanings, Every Word Is a Bird We Teach to Sing explores the way communication shapes reality. From the art of translation to the lyricism of sign language, these essays display the stunning range of Tammet's literary and polyglot talents.

Daniel Tammet is an essayist, novelist and translator. He is the author of Thinking in Numbers, Embracing the Wide Sky, and the New York Times bestseller Born on a Blue Day. Tammet is Fellow of the Royal Society of Arts (FRSA). He lives in Paris.

"A fascinating journey through language and some of its many varied forms and uses."—Booklist (starred review)

"Like Oliver Sacks' compendium of rare neurological anomalies, Tammet's intriguing cases of linguistic idiosyncrasies expand our notions on what it means to be human. He gives insight ranging from cultural perception and social dominance, to the features of Esperanto as a universal language. Most fascinating is Tammet's own astonishing linguistic mind, in which a single word evokes fully textured experiences -- an innate ability that would dazzle any storyteller in love with words and their deepest meanings."
—Amy Tan

"[An] insightful collection of 15 essays that explore language and its underappreciated nuances... Tammet is generous in his acceptance of many different forms and styles of communication. His essays will be eye-openers for anyone who takes the meaning of words on the printed page for granted."
—Publishers Weekly

"Tammet's voice -- witty, thoughtful and erudite -- pulls readers along. His enthusiasm for language makes such niche topics as Icelandic baby names and the intricacies of L'Academie Francaise fascinating and accessible."
—Shelf Awareness

"A cerebral jaunt though spoken, printed, championed and neglected words....Through Tammet's beautifully written explanations of the way his mind comprehends words (many words -- the author speaks 11 languages), readers may discover trapdoors flinging open in their own brains, revealing head-cocking perspectives on how to get one's point across."
—Washington Post

"Tammet takes us on a series of thought-provoking journeys as he probes the depth and intricacies of how language profoundly affects behavior at every social and political level. Through these memoir-like essays, Tammet demonstrates his eclectic approach to an exploration of the richness of language and its profound effect on his own life and those about whom he writes... this whirlwind narrative mirrors the author's polyglot talents... Those interested in language, words, meaning, and sociolinguistics will find this slim volume to be a transforming read. General readers will also find this highly readable work engaging."
—Library Journal

Praise for Thinking in Numbers
"Enlarges one's wonder at Tammet's mind and his all-embracing vision of the world as grounded in numbers." --Oliver Sacks, MD—-

"A book about words and language might sound dry or lofty, but Tammet's writing is lucid, thoughtful and often funny, drawing readers in and leaving us thinking a little differently about language."

"A delightful, diverse collection of essays. Great fun and the perfect gift for any math-phobic person, young or old." --Kirkus Reviews (starred review)—-

"Tammet is a master of gleaning profound insights from seemingly mundane trivia...This is a delightful book." --Publishers Weekly (starred and boxed review)—-

"Whether or not readers consider themselves mathematically inclined, they will be enthralled. This book will charm just about anyone." --Library Journal (starred review)—-

"A mind-expanding, kinetic aesthetic experience. Tammet's poetic mathematics are beautiful guideposts for thinking about life and even love." --Amy Tan
—-

"A engrossing blend of autobiography, mathematical theory, and 'what if' speculations, Daniel Tammet's essays allow us to see the world through the lens of numbers. The result is fascinating, even dizzying series of fresh perspectives on things we thought we knew." --Billy Collins
—-

"How many mathematicians are dazzling storytellers as well? What a joy to read an author whose dexterity with digits is matched by his wisdom with words." --David Eagleman, PhD, neuroscientist, author of Incognito and Sum—-

"Intriguing, provocative - to wrestle with numbers in this way is an adventure." --Lydia Davis, author of The Collected Stories of Lydia Davis—-

"Thinking in Numbers is a magnificently, movingly peculiar and wise book." --Kurt Andersen, author of True Believers and host of Studio 360—-

"With Einsteinian elegance, Tammet recasts our perceptions of the human experience in this extraordinary collection of essays. His remarkable talent for expression--for enlightening, moving, and transforming his reader--reveals a rare combination of ingenuity and artistry." --David Finch, author of The Journal of Best Practices—-