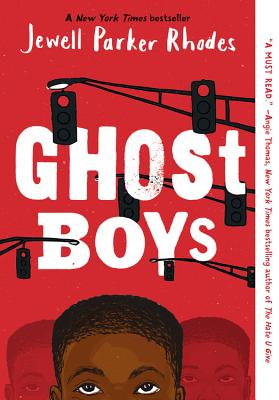 By Jewell Parker Rhodes
$7.99
In Stock

Jerome was having a pretty normal day - answering teachers, dodging bullies, making a new friend. After school he was playing outside with a new toy gun, and that's when the day become totally different. He died... by a bullet from a policeman's gun. And now he's a ghost, watching his family, his new friend, his trial... and the policeman's daughter, who is wondering how this could be real.
He is not alone, there is another other ghost boy, Emmitt, who might tell him what is going on...

A heartbreaking and powerful story about a black boy killed by a police officer, drawing connections through history, from award-winning author Jewell Parker Rhodes.
An instant New York Times bestseller
An instant IndieBound bestseller
The #1 Kids' Indie Next Pick
A Walter Award winner
Only the living can make the world better. Live and make it better.
Twelve-year-old Jerome is shot by a police officer who mistakes his toy gun for a real threat. As a ghost, he observes the devastation that's been unleashed on his family and community in the wake of what they see as an unjust and brutal killing.
Soon Jerome meets another ghost: Emmett Till, a boy from a very different time but similar circumstances. Emmett helps Jerome process what has happened, on a journey towards recognizing how historical racism may have led to the events that ended his life. Jerome also meets Sarah, the daughter of the police officer, who grapples with her father's actions.
Once again Jewell Parker Rhodes deftly weaves historical and socio-political layers into a gripping and poignant story about how children and families face the complexities of today's world, and how one boy grows to understand American blackness in the aftermath of his own death.

"This was one of my most anticipated 2018 books and I was not disappointed. A must read."—Angie Thomas, the #1 New York Times bestselling author of The Hate U Give

* "Rhodes captures the all-too-real pain of racial injustice and provides an important window for readers who are just beginning to explore the ideas of privilege and implicit bias."
—School Library Journal, starred review

* "An excellent novel that delves into the timely topic of racism... with the question of whether or not we really have come far when dealing with race relations."—School Library Connection, starred review

"In writing that's spare and powerful, Rhodes takes us into the hearts and minds of those who are left behind, and then out into a vast and luminous world where ghost boys wander among the living, pursuing their mysterious mission. Rhodes has achieved something remarkable here: a kid's-eye-view of violence and racism that balances innocence and outrage, wrenching loss and hard-won hope."—Chicago Tribune

"[A] potent story that deserves to be read."—VOYA

"Ghost Boys is powerful in prose, and so important at this time. I hope parents will read this book to their children."—The Monitor

"Unblinkingly confronts challenging perspectives and the mutability of truth."—Shelf Awareness

Bayou Magic
was an LA Times summer reading selection and a Center for the Study of
Multicultural Children's Literature Best Books selection.

Towers Falling was
an Indiebound Kids' Next List selection, a Junior Library Guild
selection, one of Amazon's Best Books of the Month, a Notable Social
Studies Trade Book for Young People, a Seventeen Magazine Best Book of the Year, and a Notable Book for a Global Society.